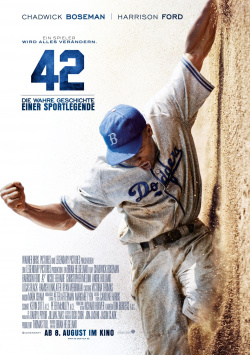 Sports films - especially those dealing with sports that are rather unpopular in this country, such as baseball or football - generally have a hard time in Germany. Too often viewers are put off by the sports theme, which is a shame in that there are often interesting, beautiful, moving, exciting or amusing stories hidden behind the sporting façade, which are thus denied a wide audience. 42 is one such case. While the film, which immediately rocketed to the top of the box office charts in the U.S., is superficially a story about baseball, the drama about sports legend Jackie Robinson is actually about much more: about racism, about overcoming prejudice, and about how even one person can make a lot of difference.

It all starts when Branch Rickey (Harrison Ford), manager of the Brooklyn Dogers, decides in 1945 that it's time to break down the racial barriers in American Major League Baseball. He hires young player Jackie Robinson (Chadwick Boseman) to initially play for the Montreal Royals. There, in the minor leagues, Robinson is supposed to prove that he has what it takes to make it to the major leagues. But Rickey's attitude toward black players is not well received by officials, coaches, and players. And so Jackie encounters a lot of rejection, hatred and humiliating gloating from his own team, from the opposing teams, but also in hotels, at rest stops or from the press. It is difficult for him to keep his hot temper under control. But with the help of his wife Rachel (Nicole Beharie) and the unwavering faith Rickey shows him, Jackie Robinson manages to defy racism and become a legend as Number 42 of the Brooklyn Dodgers.

Director Brian Helgeland (Knights of Passion) tells the story of the legendary Number 42 in a rousing way, only using a little too much pathos towards the end. Otherwise, however, the film evokes quite a lot of emotion without overly cheesy music or campy dialogue. It succeeds because Helgeland focused on a rather short, but still very intense period in Jackie Robinson's life instead of directing a lengthy biopic. Since Helgeland was sure he could not do justice to the greatness and importance of the sports legend anyway, by limiting the story to the early days of his career he wanted to at least make clear the difficult struggle Robinson had to endure and how this not only changed his life permanently.

The plot of the film is, at its core, a classic hero's tale in which a person brings about far-reaching changes by overcoming seemingly insurmountable odds. As such, the dramaturgical structure offers little that is inherently new and could so easily lead to viscous boredom. But Helgeland knows very well how to avoid that. Despite a certain recognition value, his drama always remains powerful and engaging, which is not only due to the fact that the whole thing is based on a true story. Rather, the director manages to make his story, set in the 1940s, feel very current and turn it into a very universal plea against prejudice, hatred and small-mindedness.

The whole thing is carried by an excellent ensemble of actors. In addition to Chadwick Boseman, who like many of his fellow actors had to go through rigorous baseball training beforehand, Harrison Ford is particularly inspiring as the baseball manager who stands up to the entire league to bring about long overdue change. The good actors, coherent set and great soundtrack, along with the good script, make 42 a great drama that uses a little humor to lighten up the difficult subject far enough to keep the moral of the story from being too obtrusive to the audience. Rather, the entertainment value is clearly in the foreground here. The fact that a good and above all important story is also told, is a very pleasant side effect, which allows only one conclusion: absolutely worth seeing!