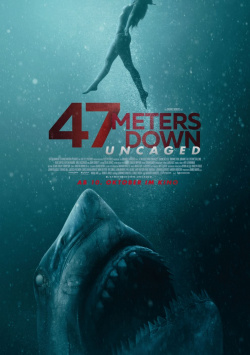 A boring boat trip? That's just for tourists. Nicole (Sistine Rose Stallone), Sasha (Corinne Foxx), Alexa (Brianne Tju) and Mia (Sophie N&eacute;lisse) would rather dive to a sunken Mayan city in a remote location. Just a quick peek and then right back. Too bad that the four girls are suddenly stuck in the underwater labyrinth and are chased by giant great white sharks that are up to no good in this mystical underwater city. There is no way out and oxygen is running low. A panicked fight for survival begins.

With the shark horror 47 Meters Down, director Johannes Roberts achieves a real surprise success. With production costs of around $5 million, the flick managed to recoup almost ten times that amount in the US alone two years ago. No wonder a sequel had to be made quickly. In 47 Meters Down: Uncaged, Roberts takes his protagonists out of their protective cage and sends them into a nerve-wracking underwater maze. Except for the fact that sharks play the main role again, this new story has nothing in common with its predecessor. So it's not a direct sequel, but rather another chapter in the 47 Meters Down universe.

As with the predecessor, the story itself is completely uninteresting. What has a much more negative effect here is the fact that the protagonists get on your nerves very quickly. After half an hour with these cliché characters you quickly side with the sharks, which surely wasn't the director's intention. But the behavior of the young women is just too annoying and too stupid for you to really sympathize with their fight for survival. A few completely illogical moments then further cloud the entertainment factor of this B-movie.

However - and you have to hand it to the film - the visual realization is very well done. In addition, the desperate swim through narrow corridors and dark corners of the ancient Mayan city now and then quite real tension, even if the very big surprises are missing. 47 Meters Down: Uncaged is, in the end, a film you should think as little about as possible. Then it is actually fun in some scenes. But you can't do it without a good script and talented actors - and that's where this movie is lacking. And so the bottom line is enough for a rather weak: Only conditionally worth seeing!