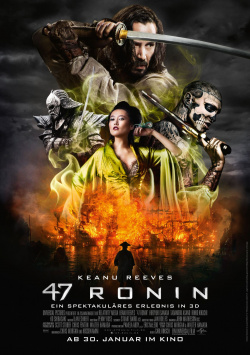 At the age of 13, orphan Kai (Keanu Reeves) is found by Lord Asano (Min Tanaka) in the forests of Ako Province. Although Kai faces only rejection as a half-blood, Asano decides to take the boy in. Years later, Kai, who is secretly in love with Mika (Ko Shibasaki), the lord's daughter, must watch his master commit ritual suicide after being lured into a trap by Lord Kiras (Tadanobu Asano) with the help of a witch (Rinko Kikuchi). Asano's 47 samurai are henceforth masterless ronin, driven into exile. Under the leadership of Oishi (Hiroyuki Sanada), Asano's once highest-ranking samurai, the 47 ronin seek revenge for the death of their lord. But to do so, they need the help of the despised half-breed Kai, of all people.

47 Ronin is based on one of the most famous legends in Japanese history. Everyone in Japan knows the heroic myth of the 47 warriors who avenged their master. They symbolize unconditional loyalty, honor, and faithfulness, which is why their story is retold again and again in a variety of forms. Whether as a stage play, a book or a film, this heroic myth is still perfectly suited today to tell an exciting and rousing story. That's what the makers of this latest adaptation thought, too, who wanted to weave parts of the true story with fantasy elements into a very big cinematic adventure. Rookie director Carl Erik Rinsch was hired to make it happen. But unfortunately, the Ridley Scott-funded commercial and short film director certainly won't remember his first feature film experience in a particularly positive light.

After costs were already skyrocketing from the decision to shoot the film in 3D, the planned November 2012 release had to be pushed back a few months to continue working on the 3D effects. The studio apparently didn't like the results well enough, as more reshoots were arranged and the release was again pushed back by nearly a year. In the meantime, the production costs amounted to over 170 million dollars. The film would have to be a huge blockbuster to make a profit for the studio. But after the start in Japan was more than disappointing, the expectations for the other markets were also significantly lowered.

So the film was not shown to the press in the U.S. in advance and it was saved on marketing overall, so as not to suffer even greater financial damage. With under 40 million dollars box office receipts in the USA and scarcely 120 million world-wide 47 Ronin must be called then also as enormous flop - at least in financial regard. But how does it look in artistic terms. Is the big comeback hope of Keanu Reeves all in all a big flop? No question, the film looks very good. Sets, costumes, special effects - all of it has great showmanship. And especially at the beginning, the flick definitely reveals the potential for quite a great cinematic adventure.

However, this potential remains largely untapped. The biggest problem of the film is a completely indecisive staging. The fantasy elements are used too sporadically, to the point that they almost feel like a foreign body in an otherwise more traditional adventure story. This has some decent moments of suspense to offer, but is then also repeatedly slowed down by very long-winded dialogue scenes, in which the weaknesses of the script are particularly noticeable. Here, the cliché club was plowed through the pages so much that the one or other unintentionally funny moment comes up.

47 Ronin is not really a bad movie. It just has too many decent moments and too good a showmanship to offer for that. However, by the end of the flick, you just wonder what target audience it's aimed at. It's too much of a fantasy film to appeal to lovers of traditional adventure films. But at the same time, it's too little fantasy film to consistently entertain fans of that genre. And the fight sequences are so well-acted for a low age rating that fans of something a little more hardcore are likely to be bored. The potential for something great is visible throughout and manages to fully break out every now and then. But all in all this movie just isn't fish and not meat. And for that, in the end, there is only one: Conditionally worth seeing