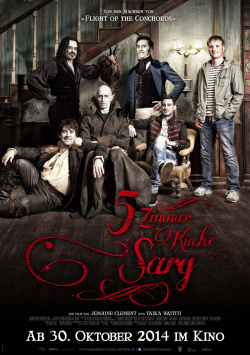 When four very different men live together in a flat share, then the chaos is already pre-programmed. But when the roommates are four vampires from different eras, normality is actually out of the question. All the more astonishing is the footage of a film crew that was granted access to the vampire flat-sharing of Viago (Taika Waititi), Vladislav (Jemaine Clement), Deacon (Jonathan Brugh) and Petyr (Ben Fransham). In the absolutely authentic documentary 5 Room Kitchen Coffin, the filmmakers expose that even vampires have to deal with the normal everyday problems of flat-sharing life: who does the washing up, who looks after the food and which outfit suits the next party night - a very special problem when you don't have a mirror image. But despite much friction, the four bloodsuckers' coexistence works - until Petyr turns young Nick (Cori Gonzales-Macuer) into a vampire. At first, the experienced vampires hope to learn something about the modern world through the twenty-something, while in return they teach him the ancient basic rules for eternal life. But that just doesn't quite want to work out. When Nick then also brings his friend Stu (Stu Rutherford), the flat-sharing life finally gets out of joint.

The format of the so-called mockumentary, so a fake documentary, is really no longer new. At the latest since the international success of the comedy series The Office and its numerous variants such as the German version Stromberg, many series, but occasionally also films use this stylistic device. And as with the not entirely dissimilar found footage genre, overuse ensures that the effect achieved at the beginning has worn off somewhat in the meantime. Nevertheless, Taika Waititi and Jemaine Clement's vampire mockumentary 5 Room Kitchen Coffin has managed quite brilliantly to defy any signs of wear and tear on the subject and set the stage for a wonderfully original and extremely funny comedy.

The comedic effect is achieved not only by playing with the common stylistic devices of the mockumentary, but primarily by the fact that countless vampire clichés are transferred here with the quite normal life in a modern big city. Sure, not every gag hits the mark. But even in its weaker moments, the production exudes an incredible amount of wit and charm. One not only notices in the play of the actors that those involved here obviously had a lot of fun writing and realizing the weird story.

When the vampires clash with a gang of werewolves, desperately try to get invited to clubs or prepare a truly delicious dinner for two potential victims, when Viago skypes for the first time or Vladislav shows the audience his torture chamber, then really no eye remains dry. Based on the atmosphere in the completely sold-out cinema at the Fantasy Filmfest, where the enthusiastic audience gave the film minutes of applause at the end, 5 Room Kitchen Coffin is a real hit as a horror comedy, which also ensures a good mood with the target audience, especially because of many genre allusions. Those hoping for hearty horror fare, on the other hand, will be bitterly disappointed. And also who can not do anything with humor of the somewhat weirder kind, the genius of this film will hardly be able to recognize.

Who can get involved, on the other hand, the very special humor of the creators, who have lived out their very own style in the fan circles long ago advanced to the cult comedy series Flight of the Conchords, will experience here in any case one of the funniest films of the year and will immediately want to move into this flat share. And therefore there is also a very clear bottom line: Absolutely worth seeing!