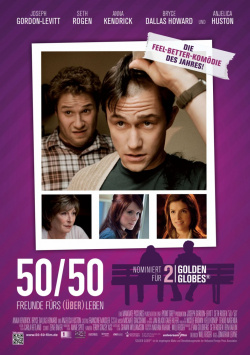 Adam Lerner (Joseph Gordon-Levitt) enjoys his life, which runs in clear order. He's happy with his job, is happily involved with his girlfriend Rachael (Bryce Dallas Howard) despite a rather disappointing sex life, and enjoys spending time with his best buddy Kyle (Seth Rogen). But then he receives shocking news: Adam has a very rare form of cancer, and his chances of survival are only 50 percent. At not even 30, Adam must now undergo severe chemotherapy, and instead of being able to make plans for the future, it's all about bare survival for him. Neither Kyle's attempts to distract his ailing friend nor his sessions with overly nervous young therapist Katherine (Anna Kendrick) really help him cope. But even though his entire life seems to be in ruins, Adam finds the strength to take on the fight against cancer, realizing that it's the things beyond his orderly daily life that make that fight worthwhile...

50/50 - Friends for (Surviving) Life is based on the true experiences screenwriter Will Reiser, a friend of producer and actor Seth Rogen, had with cancer at a young age. Writing down his battle with the disease was first and foremost a liberating experience for Reiser. The fact that it also resulted in a screenplay that Seth Rogen and co-producer Evan Goldberg immediately saw the potential for a truly great film was actually just a positive side effect. And now viewers in Germany can also benefit from it. Because the way in which the very difficult subject of cancer is treated here with humor and life-affirming lightness is simply wonderful.

This is just at the beginning still to fear that the film is a typical Seth Rogen comedy, which has more raunchy sayings than depth to offer. But this impression is quickly shattered. For Rogen's somewhat vulgar character not only turns out to be an extremely good and endearing friend to Adam, but his sometimes somewhat outspoken nature is also an uplifting and comforting anchor for him in a time marked by uncertainty and pain.

With some wonderful dialogues and his lovable characters 50/50 - Freunde fürs (Über)leben sometimes makes its audience laugh, then again provides a thick lump in the throat, only to be able to conjure up a smile on the faces of the audience with his charm again a short time later. Joseph Gordon-Lewitt (Inception, (500) Days of Summer) proves once again why he is rightly considered one of the best actors of his generation. His acting is pleasantly restrained and authentic in both the more humorous and dramatic moments. But Anna Kendrick (Up in the Air) as a hypernervous therapist and Anjelica Huston as an overprotective mother also make this small independent film quite great acting cinema.

50/50 - Friends for (Out)Life is a tragicomedy that manages the feat of telling a story in which the threat of death is omnipresent with tremendous joie de vivre. The great cast and sensitive direction by Jonathan Levine (The Wackness, All the Boys love Mandy Lane) make this film a real must-see for all fans of American independent cinema. Absolutely worth seeing!!!