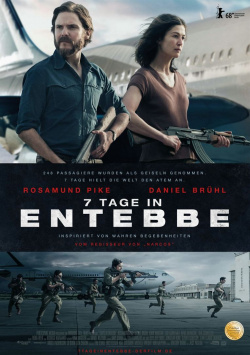 27. June 1976 - What begins like a normal flight for pilot Jacques Le Moine (Denis M&eacute;nochet) and the crew of Air France plane 139 from Tel Aviv to Paris quickly turns into a nightmare. For a group of Palestinian and German terrorists led by Wilfried Böse (Daniel Brühl) and Brigitte Kuhlmann (Rosamund Pike) take control of the plane. They force a landing in Entebbe, Uganda. Here, the Israeli hostages on board are to be exchanged for Palestinian prisoners. An international crisis looms and the Israeli government must make a difficult decision: should it negotiate with the terrorists, contrary to its previous maxim, or risk the lives of the hostages. Seven long days of waiting and negotiating begin - seven days that bring more than just the hostages to the brink of despair.

7 Days in Entebbe is an attempt to shed light on the events surrounding the taking of the Air France plane hostage in June 1976 from different perspectives. Director Jos&eacute; Padilha (Tropa de Elite, RoboCop) aims not only to highlight the political implications of this act of terror, but also to shed light on the human aspects - of both the hostages and the terrorists. And in doing so, of course, the film makes itself vulnerable. By focusing on the two German hostage-takers, Wilfried Böse and Brigitte Kuhlmann, and their scruples when it comes to actually pulling the trigger, they almost become sympathetic figures - especially when they are juxtaposed with ice-cold politicians such as Shimon Peres, then Minister of Defense (and later President) of Israel. Peres, played by Eddie Marsan, is portrayed so unsympathetically that as a viewer you're almost inclined to side with the terrorists. And that, of course, is not necessarily what the film is trying to achieve.

It's a thoroughly brave approach to not only portray the terrorists as faceless monsters, but also to give them some humanity despite their actions. But such a thing is always an extremely difficult balancing act, which Jos&eacute; Padilha unfortunately doesn't master very well. Other characters on the other hand, like pilot Jacques Le Moine, are much better fleshed out - though that may also be due to the fact that he's a very clearly positive figure - which just isn't as easy (or even possible) to say about other protagonists.

Besides some moral concerns the film raises, it also has to deal with some small lengths, which are made up for by the ehr excitingly staged last act though. Acting-wise, the whole thing is on a good level, although some performances lack a bit of subtlety. The bottom line is that 7 Days in Entebbe is a film with good aspects, with very successful staging approaches, but also with some noticeable weaknesses - dramaturgically, as well as in terms of acting and directing. Therefore, in the end, there is only with some deductions still a: worth seeing!

Cinema trailer for the movie "7 Days in Entebbe (USA/Großbritannien 2017)"
Loading the player ...