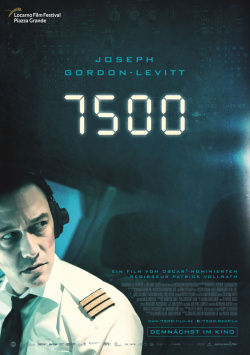 It was supposed to be a routine flight from Berlin to Paris. But shortly after takeoff, the flight turns into one hell of a trip when a group of young men try to storm the cockpit of the Airbus A 319. The pilot and his co-pilot Tobias Ellis (Joseph Gordon-Levitt) consistently keep the door locked, even when it costs the life of the first hostage. Nevertheless, the men, including eighteen-year-old Vedat (Omid Memar), manage to storm the cockpit, spilling more blood. It's now up to Tobias to save his life and the lives of the passengers - but time is running out.

Director Patrick Vollrath, Oscar-nominated for his short film Everything Will Be All Right, has directed his feature-length debut 7500, an intense chamber drama that takes place almost entirely in a cramped airplane cockpit. The viewer doesn't get to see what happens in the passenger area. Only what happens directly in front of the door to the pilot's cabin is transmitted to the inside of the cockpit via a small monitor and thus becomes visible to the audience. This drastic reduction of the action and the very limited angle of view creates an extremely oppressive feeling that reflects the helplessness of the main character very authentically.

Vollrath also largely does without music or exaggerated sound effects. This creates a frighteningly authentic atmosphere that makes the film almost unbearably suspenseful. However, Vollrath fails to maintain this level until the end. In the last third, the action suffers a bit from overly plodding moments and clichéd dialogue that only unnecessarily drags out the inevitable finale. Great praise is due to Joseph Gordon-Levitt, who even in these weaker moments carries the film almost all by himself with his really good acting.

7500 works especially well when as little as possible is shown and said. The atmosphere alone is enough to really push the audience into the cinema seats. A small film with great suspense that works really well on the big screen despite the very minimalistic imagery. Worth seeing!