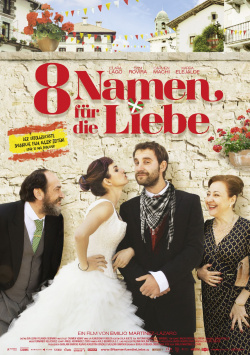 Rafa (Dani Rovira), Andalusian with heart and soul, has a problem: after a one-night stand he has fallen in love with a Basque, of all people. Andalusians and Basques - that doesn't really go together. Nevertheless, he travels after the fiery Amaia (Clara Lago) to her small hometown Argoitia to confess his love to her. But unfortunately his beloved doesn't react as he expected and so it looks like Rafa has to go back to Seville without having achieved anything. But then Amaia's father Koldo (Karra Elejalde) announces his visit, hoping to meet his future son-in-law Antxon. Too bad he's long gone. And now Amaia has to ask Rafa, of all people, to play the Basque for her father. And of course that can only end in chaos...

8 Names for Love is the most successful Spanish film of all time in its native Spain, with over 10 million admissions. It's a very similar success story to The Sh`tis back in the day. In both cases the rivalry between different regions is made fun of with exaggerated clichés and the play with dialects - in this case between Andalusia and the Basque country. Even if director Emilio Martinez Lázaro has stolen a scene from Rafa's way to Argoitia directly from the Sh`tis, he has succeeded in some very independent, really good gags that make 8 Names for Love an entertaining pleasure.

How Rafa, for example, mutates into a separatist street fighter by chance or is completely overwhelmed by Basque eating habits at the first dinner with Amaia's father provides many hearty laughs. The charm of the cast is also extremely infectious and works quite well beyond the borders of Spain. The play on the prejudices that Andalusians and Basques face, on the other hand, is something that of course only those viewers who are familiar with these regions of Spain can really understand. Admittedly, there is not much left of the wordplay in the dubbing either.

Even more so than The Sh`tis, 8 Names for Love is a very regional comedy that does have cross-border wit and charm. Even without ever having been to Spain or knowing exactly what the cultural and ideological differences are between Andalusians and Basques, the comedy offers some very amusing moments that can be laughed heartily at quite universally. But the enormous success in its home country can only be understood to a limited extent by German viewers. Because apart from the game with prejudices and clichés, the film offers only very conventional fare with some highlights, but also with some hangs and too overly klamaukig presented gags.

Who likes romantic comedies of the somewhat overdone kind, comes here nevertheless fully at his expense. The picturesque landscape of the Basque country, the likeable actors and a lot of successful situation comedy make the Spanish blockbuster despite some weak moments to a nice fun, which does not have the cult potential of the Sh`tis, but which offers one and a half hours of happy escape from reality for the heart and the laughing muscles. Not quite the big hit, but overall still definitely worth seeing