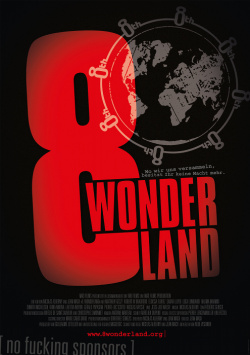 The Internet has long been more than a colorful playground where you can find all kinds of information, funny videos or masses of undressed people in unambiguous positions. The Internet is also a powerful instrument of power, used by advertising, corporations, but also by politics. The film "8th Wonderland" attempts to show not only how powerful the Internet can be, but also how easily the supposed independence of the World Wide Web can be influenced.

The 8th Wonderland is an Internet community with members all over the world. Democracy reigns here, values such as equality and humanity are writ large. Any form of oppression, exploitation or corruption are a thorn in the side of the inhabitants of the digital wonderland. That's why they are always coming up with guerrilla actions with which they hope to change the world for the better. Whether condom vending machines are set up in the Vatican or the Thanksgiving turkey of the US president is kidnapped, the actions of the 8th Wonderland attract more and more media interest. But the greater the interest from the outside and the more radical the actions carried out in the name of the Wonderland become, the stronger the doubts within the community become. And when a certain John McClane claims to be the creator of the whole thing and exploits the popularity of the 8th Wonderland for purely commercial purposes, the virtual state threatens to collapse for good...

"8th Wonderland" is undoubtedly a very ambitious project. It is quite fascinating that here two filmmakers with the simplest of means and a low budget are able to entertain better in parts and convey more intelligent content than many large-scale productions. However, it also can't be denied that the movie seems to be a little bit too forced and simply exhausting in many places. The ambitions of the filmmakers are simply too high and crush the at the beginning still refreshingly relaxed production under its enormous weight.

Dennoch: the film is original and thought-provoking. And not in a bad way. The execution of the whole thing is consistent and never actually feels like a feature film, which definitely intensifies the effect. If you like to spend your time on Facebook, MySpace and Co. or if you want to deal with a possible future of internet communities in a very entertaining way, you should definitely take a trip to the "8th Wonderland". Not a film for mass tastes, but still a highly interesting film experiment!