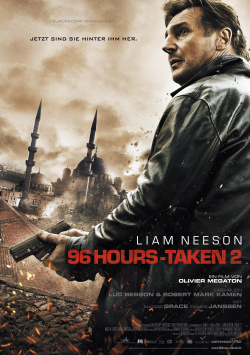 Although it's been a year and a half since former CIA agent Bryan Mills (Liam Neeson) had to rescue his daughter Kim (Maggie Grace) from the hands of Albanian white slavers in Paris, he just can't seem to shake his concern for Kim. He constantly wants to be informed about her whereabouts and new friends are meticulously investigated in the best CIA manner. Meanwhile, he uses his professional skills as a bodyguard, which also takes him abroad time and again. An assignment in Istanbul offers Bryan the perfect opportunity to prove to his ex-wife Lenore and Kim that he is not only a fighter, but also a father and a man. And so he invites them both to visit him in the Turkish metropolis after the job is done. Too bad Murad (Rade Serbedzija), the father of some of the men Bryan killed in Paris, is out for revenge. And so the vacation planned as a family idyll turns into a deadly nightmare when Bryan and Lenore are kidnapped by Murad's men. But Kim has learned a lot from her father, and so it soon comes down to another rescue mission that quickly becomes a race against time...

After 96 Hours turned out to be a real surprise hit three years ago, a sequel was naturally only a matter of time. Producer Luc Besson, who also co-wrote the screenplay again for Part 2, hired Olivier Megaton, with whom he had already successfully directed Transporter 3 and Colombiana, to direct. Megaton's forte is truly not storytelling or strong character drawing. His talent lies more in the choreography of action scenes and duels, which again dominate the action in 96 Hours - Taken 2.

In terms of content, therefore, not much should be expected. The story of the first part is varied here only a little to be able to pass as a sequel - something like once with Kevin alone at home and Kevin alone in New York. The dramatization only serves to put the characters back in the situation fans want to see. But what gives it that special touch, and thus makes up for the lack of originality, is the relocation of the action to Istanbul. The wild chases through the Turkish metropolis, whether on foot or in a car, on the streets or over the rooftops, have a high show and entertainment value.

Logic, of course, does not play a major role in this either and should definitely not be required. Because as soon as you question even one aspect of the story, and especially of the instructions Bryan gives his daughter, the movie stops being fun and you miss too much of the action because you're busy rolling your eyes in annoyance the whole time. Therefore, a largely complete shutdown of the intellectual abilities of the brain is advisable to be entertained by this action movie.

Now the question remains, if the action and fight sequences are on the level of the first part. This can only be answered in the affirmative to a limited extent. As far as the chases and shootouts are concerned, part 2 is hardly inferior to its predecessor in something. As far as the direct duels are concerned, Liam Neeson seems a bit more ponderous and slower this time than during his revenge campaign through Paris. The whole thing doesn't seem as hard and dirty anymore, but rather smooth and less spectacular.

So 96 Hours - Taken 2 is a typical sequel that repackages the familiar, should satisfy fans as a result, but overall doesn't reach the class of its predecessor. A typical Besson production, which offers much for the eye, but little for the brain. If you liked the first part and the previous works of Olivier Megaton, you will definitely get your money's worth here. Worth seeing