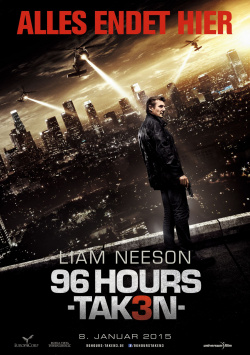 Former top agent Bryan Mills (Liam Neeson) just can't seem to settle down. Having already put himself in mortal danger twice, as well as his ex-wife Lenore (Famke Janssen) and daughter Kim (Maggie Grace), all he really wants now is to live a quiet, secluded life and take care of his loved ones. But of course, the bad guys won't let that happen. And before he knows it, Bryan is under suspicion of murder and must flee from the extremely persistent cop Frank Dotzler (Forest Whitaker). With the police breathing down his neck, he has little time to figure out who is trying to frame him for the murder. And the noose around his neck tightens ever faster as Kim also finds herself in real danger.

96 Hours - Taken 3 is the (supposedly) final installment in the successful action series penned by Luc Besson and starring Bryan Mills, which launched in 2009 with an extremely fast-paced and gritty thriller. Part 2, which came in 2012 in the cinemas, wanted to take it up a notch, but fell overall but significantly weaker than the predecessor. For the third and final installment, the story has been varied a bit, giving it the necessary dash of fresh air that the second film lacked. And with the very analytically thinking Frank Dotzler, convincingly played by Forest Whitaker, an interesting opponent was brought into the game, who is a good complement to the hard-boiled Bryan Mills.

But despite an intrinsically exciting story, some really well staged action sequences and the good actors the spark does not really want to jump. The action rarely really picks up speed and even the duels, which were the highlight of the first film, seem very ponderous and surprisingly bland. Liam Neeson, who has shown time and again, especially in recent years, that he can be a really good action hero, really drags himself through the scenery, only very occasionally being able to show a hint of the form with which he brought the ex-agent to life back in the day.

When 96 Hours - Taken 3 does work, however, it really does. There are a few scenes where it becomes clear once again why these films are so popular and successful. Even if such moments prevent the third part has become a complete disappointment, so probably few are sad that Bryan Mills is now finally retired. Besides, the I just want to be a good family man storyline is just extremely hackneyed after three films, even if a new twist was introduced in the third attempt.

Fans of the first two films and of action Liam will get their money's worth in about half of the flick's nearly two-hour running time. If that's enough for you, you can safely watch this farewell to Bryan Mills at the cinema. However, if you already noticed slight signs of fatigue with Part 2, you'd better wait for the home theatrical release, as the many plodding moments here can easily be fast-forwarded. Overall, so neither an action milestone, nor a complete Rohrkrepierer, but somewhere in between and therefore also: for fans with cutbacks worth seeing!