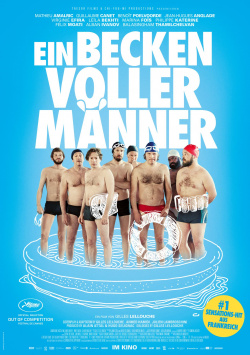 A Pool Full of Men

For many months, Bertrand (Mathieu Amalric) has not worked. He just can't manage to get back into society. But then he meets a group of men who get rid of their everyday frustrations by forming a male synchronized swimming team. Bertrand joins the colorful troupe, led by once-celebrated synchronized swimmer Delphine (Virginie Efira), and feels right at home. He becomes more and more involved, which reaches its climax when the team gets the opportunity to participate in an international competition. But at this point, at the latest, it is revealed that Bertrand is not the only one struggling with his life outside the pool.

A Pool Full of Men is already the third feature film dealing with the story of a male synchronized swimming team based on true events. In addition to last year's British version Swimming with Men, there was also the 2008 Swedish film Men in the Water. And a 2010 documentary also focused on synchronized swimmers. Even though the theme of all these films is the same, their execution is very different. In the case of the French version, for which the actor Gilles Lellouche is responsible, the result is unfortunately only partly entertaining.

While the film actually has everything a good comedy needs: a great cast ensemble, a nice story and a few wonderfully funny scenes, in which the humor may also be a little politically incorrect. So why is A Basin Full of Men ultimately just nice average? It's because the film takes far too long to get going. Over an hour is first spent on the individual fates of (almost) all the members of the team. Anxiety, alcohol addiction, unfulfilled dreams, and broken marriages are just some of the problems that are addressed here. On the one hand, this is not really amusing and on the other hand, it's just too much of a good thing.

When the actual story finally takes over, the comedy gets not only speed, but also a lot of wit. The last 45 minutes are also really good, revealing how the film could have turned out if things had been a little less thick when it came to the drama. All in all, A Pool Full of Men is dramaturgically a bit weaker than Swimming with Men, but this can still be made up for by the great cast and some really funny moments. And so there is - with small restrictions - in the end also a satisfied: worth seeing!

Cinema trailer for the movie "A Pool Full of Men (Frankreich 2018)"
Loading the player ...