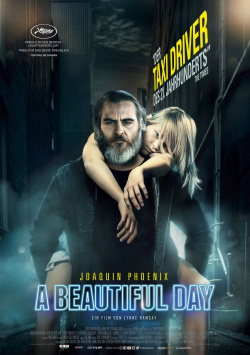 Ex-military Joe (Joaquin Phoenix), scarred by his past, is a pro at finding and freeing underage kidnap victims. He's a genius sleuth and a merciless avenger who always stays in the shadows. When he has to rescue the daughter of a New York senator from a brothel, everything looks like a normal job for Joe at first. But suddenly he himself is part of a far-reaching intrigue, through which not only his own life is in danger.

After the oppressive family drama We need to talk about Kevin, director Lynne Ramsay returns with A Beautiful Day. Her latest thriller drama is no less uncomfortable than its award-winning predecessor. Based on the novella by American novelist, screenwriter and actor Jonathan Ames, Ramsay has an atmospherically dense look into the deepest recesses of the human soul. This is at times disturbing, brutal and repulsive, but is thankfully done in a way that is less bold and more artful. On the one hand, this is a great strength of the film, as any form of voyeuristic depiction of violence would have been completely out of place here.

On the other hand, the director's idiosyncratic style could also be called a weak point. After all, the very carried narrative pace, Joaquin Phoenix's wordless acting and the story's gloomy, oppressive atmosphere aren't exactly what you'd call entertaining. In more ways than one, the film is a challenge that I'm sure not everyone wants to face. So it's quite possible that some people find the movie extremely gripping and especially on the psychological level extremely effective, while others see the whole thing as a boring revenge thriller with some violent spikes. Both points of view are perfectly understandable.

Therefore, before buying your movie ticket, you should first ask yourself: do I like somewhat unwieldy arthouse thrillers that place more emphasis on their visual aesthetics than on pacing? For those who can answer yes and are not too squeamish, A Beautiful Day can be recommended. But if you're more into pace and action and can't get along with extreme slowness, you might have a hard time with this really well-acted thriller. All in all: If you like movies like Drive, A Beautiful Day is also absolutely worth seeing, despite some lengths!

Cinema trailer for the movie "A Beautiful Day (Großbritannien 2017)"
Loading the player ...