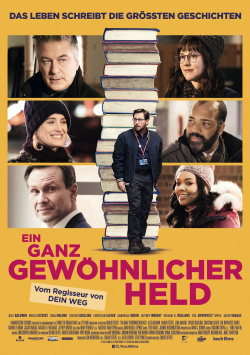 An extreme cold snap plagues the residents of the city of Cincinnati. The many homeless in particular are suffering from the freezing cold, especially since warm places to sleep are scarce. During the day, many of them spend their time in the rooms of the city library, where they always find a sympathetic ear from the dedicated staff members Stuart (Emilio Estevez) and Myra (Jena Malone). But they also have to abide by the house rules, Stuart knows no quarter. But when the cold claims its first victims, a group of homeless people around Jackson (Michael Kenneth Williams) decides not to leave the library in the evening. They demand to be allowed to spend the night in the rooms. While Stuart sides with them, tough headwinds come from police negotiator Bill Ramstead (Alec Baldwin), tough-as-nails prosecutor Josh Davis (Christian Slater) and news reporter Rebecca Parks (Gabrielle Union), who is focused only on ratings and her career - and Stauart must make a tough decision.

With An Ordinary Hero, actor-director Emilio Estevez (Your Way) tells a story that can be seen as a plea for greater humanity, for dignified coexistence and for social justice. Surely: This is sometimes too thickly applied and also drawn very clichéd. For example, the character of the sleazy prosecutor Davis, who would walk over dead bodies for a political career. Also the arrogant, but not exactly intellectually excellent journalist, who doesn't take the truth very seriously in view of the ratings, is portrayed in a very one-dimensional way. Unfortunately, there is no question that such people exist. But a multi-layered character drawing here would have been much more interesting for the dramaturgy.

Estevez has a message he wants to convey. It's a very important message, especially in these times, and one that should definitely be taken to heart. But the realization is too bold and should therefore only reach those viewers who are already on the same wavelength with Estevez. Apart from that, however, A Very Ordinary Hero is not a bad movie. The actors all deliver good performances, even if the script sometimes puts small obstacles in their way. The story is engagingly told and even provides a few small goosebump moments. And the ending even makes the whole thing something of a feel-good movie, despite the rather heavy subject matter.

An ordinary hero isn't quite the big thing, but has his heart in the right place. And that does make up for a lot of the minor flaws. A film that believes in the good in people and wants to open the hearts of the audience for such fellow human beings who have it worse than you. Yes, it's a little bit too much of a platitude, but the message itself is really nice. And for that there is a clear: Worth seeing!

Cinema trailer for the movie "An Ordinary Hero (USA 2018)"
Loading the player ...