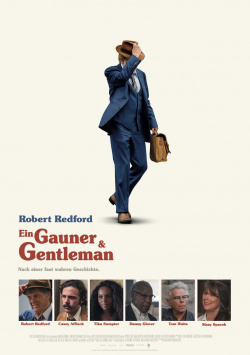 A Crook and a Gentleman

When 70-year-old gentleman Forrest Tucker (Robert Redford) enters a bank, no one suspects anything amiss. The elderly gentleman seems too friendly and charming. But appearances are deceptive, because Forrest is a notorious bank robber. Although he has already been in prison 17 times, he just can't let it go. Why should he, after all he has managed to escape from every prison so far. Together with his two accomplices (Danny Glover, Tom Waits), the gentleman crook roams the country, robbing one bank after another. Only when the investigator John Hunt (Casey Affleck) attaches himself to the heels of the trio, it may soon be over for Forrest with the life of freedom finally.

With A Crook and a Gentleman Robert Redford says goodbye after almost sixty years from the film business. At over eighty years old, the Oscar winner also more than deserves to enjoy his retirement. For his farewell performance, Redford has once again teamed up with director David Lowery, for whose Elliot the Dragon he previously appeared in front of the camera in 2016. The story told in their second collaboration sounds somewhat absurd, but is based on true events. Based on a newspaper article by David Grann from the New Yorker, Lowery uses the story primarily to show Redford at his best once again.

Because the role of the charming bank robber and breakout kingpin is perfectly tailored to Redford. Here, he gets to once again play up all the things that have made him stand out over the course of his career. His reserved but always convincing acting, his shining eyes, through which women's hearts have flown to him by the dozen, and an almost mischievous charisma, with which he could always convince both in romantic roles and as an action hero. Sure, the film has two other Oscar winners on board in Sissy Spacek and Casey Affleck, and it has a really top-notch cast in other respects as well. But even if Redford never consciously plays himself into the foreground, this is his show, in which everyone else is just a nice accessory.

This also applies to the story, by the way. It is - just because it is based on true backgrounds - really fun and also has some quite wonderful moments to offer. But to be honest, it's also a little bit too ponderously told and therefore drifts into triviality again and again. Nevertheless: David Lowery has directed an old-school Hollywood movie for Redford, the kind that doesn't really exist anymore. And even if it's a little bit too bravura and ponderous, it's still an absolutely worthy farewell for one of Hollywood's greats. Therefore, there is also quite clearly a deserved for A Crook and a Gentleman: Absolutely worth seeing!

Cinema trailer for the movie "A Crook and a Gentleman (USA 2018)"
Loading the player ...