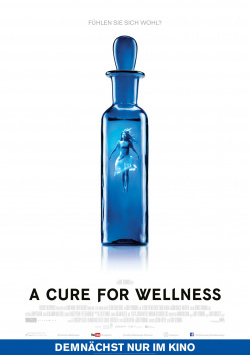 A Cure for Wellness

For the young stockbroker Lockhart (Dane DeHaan) only money and success count. To achieve that, he sometimes resorts to illegal means. This could now be his undoing when the board of directors catches him out. Now he is threatened with dismissal and even prison - unless he succeeds in bringing the CEO of his company back to New York from a remote sanatorium in the Swiss Alps. Reluctantly, he sets out, hoping to complete the job in a matter of hours. But when he arrives at the luxurious spa resort, he soon realizes that behind the picturesque facade, abysses are opening up that could engulf him as well.

After the enormous success of his Pirates of the Carribean films, director Gore Verbinski returns to the genre that gave him his big break 15 years ago with A Cure for Wellness. His latest work lives in particular from its almost hypnotic atmosphere, which is created by a perfect interplay of locations (the film was shot primarily in Germany), colouring and camera work. Especially the latter is simply ingenious. Verbinski has a good eye for special shots, which makes for some truly mesmerizingly beautiful moments here. Visually, the film is close to being a masterpiece. Dramaturgically, unfortunately, it can't quite keep up.

No question, there is something enigmatic and exciting about the story. A little bit of Thomas Mann's Der Zauberberg, to which Verbinski pays tribute in a short scene, mixed with Shutter Island and The Shining - that's perhaps the best way to describe the story. At least until the finale, which is almost reminiscent of wonderfully weird horror classics in the style of The Cabinet of Horrors of Dr. Phibes. If it is undeniable that the first two hours offer stylistically first-class horror with gothic elements, the final 30 minutes can divide the minds. Because what is offered here is completely abstruse and overdone and makes - if you can get involved - just therefore so much fun.

Dane DeHaan is just as great as the (seemingly) emotionless careerist on the brink of insanity as the wonderfully smug Jason Isaacs. Visually and acting-wise this mystery thriller is on a very high level. And even though the script has some small flaws and the production is a bit too long, Gore Verbinski has delivered a really good movie with A Cure for Wellness with some oppressive moments and well-dosed shock effects. Even if the flick will have a hard time finding a wide audience right off the bat, it's guaranteed to get exactly the attention it deserves among genre fans over time. Absolutely worth seeing

Cinema trailer for the movie "A Cure for Wellness (USA/Deutschland 2016)"
Loading the player ...