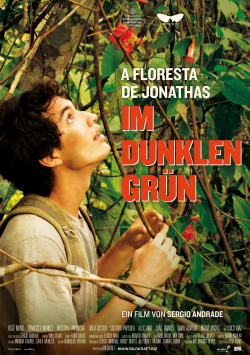 A Floresta de Jonathas - In the Dark Green

The reserved Jonathas (Beg&ecirc; Muniz) lives in the rural Amazon, where he works at his family's small fruit stand. When he meets Ukrainian Milly (Viktoryia Vinyarska) and her Brazilian companion Kedassere (Alex Lima) through his outgoing brother Juliano (&Iacute;talo Castro), he is immediately attracted to the young tourist. That's why he agrees to the proposal of camping in the jungle for a weekend with the four of them, even though his father is strictly against it. At first it looks like this trip is going to be a lot of fun. But when Jonathas wants to find some very special fruit for Milly, he gets lost in the dark green of the jungle and an adventure awaits the young man that will change him permanently.

In long, calm shots and with dialogue reduced to a minimum, director Sergio Andrade tells a story in A Floresta de Jonathas - In the Dark Green that takes place on several levels. On the one hand, it is the very individual story of a boy who has not yet found his place in life and his own identity. But the film is also about the globalization of the Amazon and how categorizations in our minds can completely lose meaning in the face of nature that is both majestic and unpredictable.

Jonathas serves as a link between urban life and the nature of the jungle. He stands right in between, with contact with tourists from big cities being as alienating to him as the time he spends in the jungle. This becomes clear right from the opening sequence, which shows his father trying to teach him how to pick fruit that they will later sell at their fruit stand. The boy is still a bit clumsy here, which makes it clear that he just isn't a child of the actually so close jungle. When he then sits at the fruit stand and his brother casually flirts with young women from the city, while Jonathas quietly watches him withdrawn into himself, it becomes obvious that the big city life, which is also not far away, is completely foreign to him. This creates an image of forlornness, which is clearly expressed in the moment Jonathas gets lost in the jungle.

The more time he spends alone in the dark greenery, the more surreal the film becomes as well. If the slow pace, the few dialogues and the long takes already run completely counter to the local viewing habits, the action here becomes even more unwieldy, which is why only very open-minded lovers of Brazilian cinema will discover the director's intentions behind the somewhat difficult facade of A Floresta de Jonathas - Im dunklen Grün. For such viewers, however, it is clearly worth buying a cinema ticket for Sergio Andrade's feature film debut. Everyone else will rather cut their teeth on this journey into the Amazon

Cinema trailer for the movie "A Floresta de Jonathas - In the Dark Green (Brasilien 2012)"
Loading the player ...