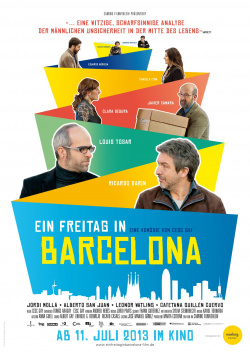 A Friday in Barcelona

Man doesn't have it easy. The wife cheats or has found new happiness after the divorce, an office flirtation turns into an embarrassing exposure or unemployment leads to moving back in with mom. And even if it goes well in the marriage superficially, man is only misunderstood or must come to terms with the fact that he can no longer stand his ground. Quite normal problems that a group of men in Barcelona also have to deal with. Chance meetings, initially casual conversations and surprising revelations ensure that for these men, this day is not A Friday in Barcelona like any other.

With his ensemble comedy A Friday in Barcelona, filmmaker Cesc Gay has taken a very amusing, but at times painfully accurate look at male insecurities and inadequacies in midlife. In doing so, he demonstrates not only a very good knowledge of human nature and a sensitive knack for delivering it humorously. His dialogues are also brimming with acumen, wit and cleverness. The comparison to Woody Allen so readily made with films like this is absolutely apt at many moments in this episodically told comedy.

With a wonderful ensemble of actors, featuring Spanish character actors such as Louis Tosar (Sleep Tight), Ricardo Darin (In Her Eyes) and Javier C&aacute;mara (Talk to Her), Gay takes his viewers through all the ups and downs that an ordinary man in his forties must go through on an ordinary day in a city like Barcelona. Not every single episode works equally well and at times the production lacks a bit of comedic timing. But the little plodding lengths or dramaturgical hangs are easy to get over in light of the many successful moments.

The humor doesn't aim for the really big laughs. A Friday in Barcelona is not an overdone slapstick, but lives from its wordplay and from the pointed portrayal of situations, in which you can put yourself as a viewer excellent, or which you have perhaps even so or so similar already experienced. It's the little moments that reveal how finely observed Gay's script and production are. The great feat he achieves is to reveal the weaknesses of his characters without making them ridiculous. In some moments this threatens to happen, but Gay always manages to get out of the way in time and thus prevents his comedy from degenerating into a completely exaggerated farce.

A Friday in Barcelona is a nice little film that offers a lot of great truths about men with biting humour, charming characters and clever wordplay. An amusing program cinema gem that lovers of European comedies and the films of Woody Allen should definitely not miss, despite minor flaws. Absolutely worth seeing!

Cinema trailer for the movie "A Friday in Barcelona (Spanien 2012)"
Loading the player ...