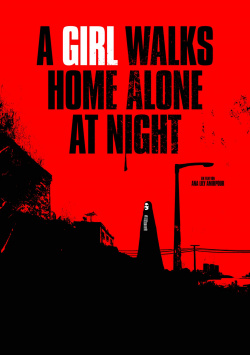 The Iranian ghost town Bad City more than lives up to its name. For only broken souls, unscrupulous criminals and outcasts from society live here. Among them is young Arash (Arash Marandi), who tries to live an honest life in the supf of drugs, violence and crime that surrounds him. This is how he has earned his beloved Ford Thunderbird. But he doesn't get much joy out of the car, because in order to pay off his father's debts, he has to give it to the dealer Saeed (Dominic Rains). When he tries to negotiate with Saeed for the car, he meets a mysterious girl (Sheila Vand), whom he immediately feels attracted to. What Arash doesn't suspect is that the girl is a vampire. Every night she rides through the city on her skateboard, cloaked in a chador, and satisfies her thirst for blood on the most depraved subjects. A tender love develops between her and Arash that shouldn't exist...

With her feature-length debut, A Girl Walks Home Alone At Night, filmmaker Ana Lily Amirpour has staged a vampire film of a somewhat different kind. But as unusual as the idea may be, the hallmarks of her obvious role models can be read from the finished work. A pinch of David Lynch, a touch of Jim Jarmusch, a tiny bit of Sergio Leone and finally some Quentin Tarantino - and an atmospheric arthouse horror is ready. Although a certain originality can't be denied, there is almost no scene in which Amirpour hasn't clearly been influenced by other filmmakers. Admittedly, that doesn't change the fact that her vampire love story, shot in atmospheric black and white, works really well for those viewers who can get into it.

This is primarily due to the surreal, hypnotic imagery. Although the film is set in Iran, it was shot entirely in a desolate oil town in the California desert. This backdrop, accompanied by a wonderfully eclectic soundtrack, gives the production a very special charm that makes even the many extremely quiet moments very exciting. The perfect interplay of images and music alone makes it clear what artistic talent Ana Lily Amirpour has. If she now succeeds in finding even more of her own, very individual signature, we will certainly see a lot of exciting and thrilling things from this director in the future.

Her debut is certainly not a film for the masses. Especially the many quiet passages are a bit too unwieldy for that. But if you like quiet, unadjusted vampire stories that live primarily from their atmospheric images and where it is definitely worth reading between the lines, you can absolutely recommend A Girl Walks Home Alone At Night, produced by Elijah Wood and others. Worth seeing

Cinema trailer for the movie "A Girl Walks Home Alone At Night (USA 2014)"
Loading the player ...