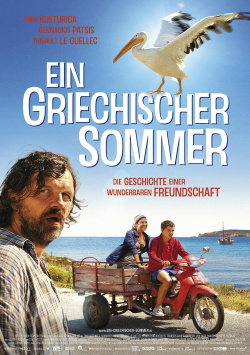 Fourteen-year-old Yannis (Thibault Le Guellec) has anything but an ordinary childhood. Since the death of his mother, he has lived with his completely emotionally closed-off father Demosthenes (Emir Kusturica) in a remote fishing hut on the small Greek island of Zora. Yannis has few friends and spends all his free time working for his father. One of these jobs takes him to a merchant ship, where the boy is supposed to bring a cargo of illegally distilled alcohol to the captain. While there, Yannis discovers a young bird seemingly struggling to survive. In exchange for the golden cross that once belonged to his mother, Yannis is able to get the bird off the ship. From then on, he hides it in the shed, always trying to keep it a secret from his father. But this proves to be extremely difficult, because the bird, which its new owner has christened Nicostratos, is a pelican that soon grows to a stately size. But even when the pelican is discovered by Demosthenes and chased out of the house, the friendship between the boy and the bird does not break. Nicostratos becomes Yanni's faithful companion, which soon attracts the first tourists to the island. More and more, the bird becomes a star, which powerfully upsets the tranquil life on Zora.

A Greek Summer is the directorial debut of Oliver Horlait, who has previously worked with the likes of Milos Forman and Luc Besson. For his first work of his own, he has chosen the award-winning novel Nicostratos by French author Eric Boisset. Set against a picturesque backdrop, it makes for a nice story about an unusual friendship, but also about a broken father-son relationship that must slowly grow back together after a major rift. Apart from the sometimes a bit wooden sounding dubbing, the production itself is successful, filled with very warm-hearted but also humorous moments.

Whether it's Yanni's careful rearing of the bird, his friendship with Angeliki (Jade-Rose Parker), the niece of the bistro owner on Zora, or Demosthenes' struggle to want to show his son what he means to him but partout not being able to, Horlait has executed all these aspects of the story with a sensitive hand. The problem with the film is that it's not entirely clear who the story is supposed to be aimed at. The friendship between the boy and the pelican naturally suggests that A Greek Summer is a children's film. But some of the film's themes are simply too profoundly realized for that. Teenagers are likely to be put off by the completely unspectacular production and the rather worn pace, although there would definitely be aspects that could appeal to this age group. Adults, finally, may enjoy the father-son relationship and the slightly satirical aspects of the film, which emerge especially when Nicostratos becomes a kind of star that the businessmen of Zora know how to use to their best advantage. But since the story of a little boy is told here in the first place, also from this side the quite big interest might fail to materialize in the end.

So in the end just a quite small cut remains, who will be able to be captivated by the quite existing beauty of the story. Children, who don't always need the really big action to get excited about a film, and adults, who appreciate sensitively told children's and youth cinema. A Greek Summer is a family film for the arthouse audience, which can please especially because of its beautiful images and the good actors despite weaknesses such as dramaturgical hangs and the somewhat lifeless dubbing. Worth seeing!

Cinema trailer for the movie "A Greek Summer (Griechenland/Frankreich 2011)"
Loading the player ...