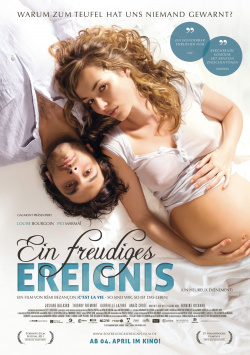 It's the joyous climax of the perfect-seeming relationship of philosophy student Barbara (Louise Bourgoin) and fun-loving Nicolas (Pio Marma&iuml;): the couple is expecting a baby. Actually, the two had been looking forward to this moment so much. But as the pregnancy progresses, Barbara begins to have more and more doubts about whether she is ready for this big step and whether their relationship is solid enough to withstand the coming demands. She can't relate to the other women in the pregnancy class at all and her sex life, which is lying fallow, is also gnawing at Barbara's nerves. Nausea, mood swings, weight gain, all quite normal side effects, with which Barbara just does not want to accept. But all this is nothing compared to the chaos that awaits the couple after the birth of little Lea. And soon the exhausting reality has killed every spark of the former euphoria and the young parents are faced with the difficult task of caring for their little daughter and saving their relationship at the same time.

In A Joyful Event, director R&eacute;mi Bezan&ccedil;on (C`est la vie - That's Us, That's Life) takes a sometimes humorous, sometimes very bitter look at the changes pregnancy brings to a parent's life. His film begins as a wonderfully unconventional and charming romance that tells of the beginning of a great love affair with a lot of heart and humour. He succeeds very well in this with the help of his main actors that Barbara and Nicolas quickly grow to the heart of the audience and one really rejoices in their love - a joy that culminates together with the screen couple in the news of the coming offspring.

Here the film begins its slow but noticeable change. The humor increasingly loses its playfulness, becoming not only closer to reality but also noticeably more cynical. And the underlying tone of the story also loses its lightheartedness and becomes more and more dominated by darker moments. Now this is not to say that the birth of a child is shown here as a pure horror scenario. But Bezan&ccedil;on tries very effectively to trace the strain pregnancy puts on a woman and how difficult it can be to deal with the loss of one's previous habits. While there are many parents who find it very easy to cope with the joy of having a baby and who are then completely absorbed in being parents, there are also people like Barbara and Nicolas for whom the new life, which is completely determined by the baby and its needs, is a real ordeal. Not only their own psyche and the bond with the child suffer, but also the relationship between the parents. And the film shows this in a very true-to-life and unembellished way.

This is sometimes quite frustrating and depressing, which is why A Joyful Event can not necessarily be recommended to expectant parents. But even though the film adaptation of Eliette Ab&eacute;ccassis' novel doesn't praise parenthood as the highest happiness on earth, and the film can't really be called feel-good cinema despite its beautiful beginning and amusing moments, its emotional honesty and avoidance of all familiar clichés is absolutely refreshing. That, coupled with Louise Bourgoin's truly excellent performance and a very personal-looking production, makes A Joyous Event a truly worthwhile piece of French cinema!

Cinema trailer for the movie "A Joyous Event (Frankreich 2011)"
Loading the player ...