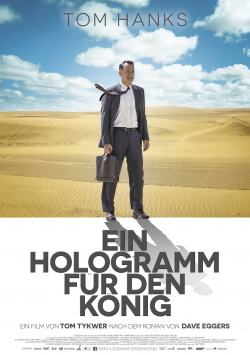 A Hologram for the King

In the past, Alan Clay (Tom Hanks) was a successful businessman. But the global financial crisis has hit him too, and at 54, he has few chances left to get back on the road to success. But if he manages to sell Saudi King Abdullah a state-of-the-art hologram communication technology, it could put him back on top and help him out of his life crisis. But no sooner has he arrived in Saudi Arabia than he has to realise that the clocks tick a little differently here and that his worldview will get him nowhere. In a country that seems to be caught somewhere between tradition and modernity, all he can do is wait for a better future. That it might not lie in professional success for him, Alan does not suspect yet.

In the film adaptation of Dave Eggers' acclaimed novel A Hologram for the King, a life-troubled man moves from the land of opportunity to find new success in what he sees as a fairytale land. He wants to free himself from the ruins of his existence - as quickly as possible. But in this foreign culture, his ambitions are repeatedly thwarted and he is condemned to stasis. It is only in this stasis that he realizes the true value of life, which cannot be expressed in dollars. The whole thing is on the one hand a quiet culture clash comedy, but at the same time also a rousing social study and a midlife crisis drama that lives from its very special atmosphere and the once again excellent Tom Hanks.

Not much really happens here. There is only a very simple plot framework within which smaller episodes take place. This ensures that the narrative flow falters from time to time, resulting in minor longueurs that may be intentional, but many viewers will probably find them more tedious than an artistically valuable stylistic device. Anyway, Tykwer's directing style proves to be absolutely appropriate to the story and as a counterpoint to the prevailing pace in contemporary mainstream cinema also quite courageous. But the result also proves just too unwieldy to be appreciated by the number of viewers this film actually deserves.

Although that may not sound particularly flattering, A Hologram for the King is best described as an interesting film. It leaves you feeling a little perplexed at times and also a certain emptiness, which on the one hand doesn't sound particularly positive, but on the other hand perfectly reflects the emotional world of the protagonist. He's not particularly exciting, but he's not really boring either. He's hard to pigeonhole, but because of that he also remains too emotionally inaccessible. But even if you had the feeling to have seen a somewhat meaningless work here, the film and its atmospheric images stick with you longer than expected. Therefore, and because Tom Hanks is simply great in this role, there is then also a clear bottom line: Worth seeing!

Cinema trailer for the movie "A Hologram for the King (Deutschland/Großbritannien 2016)"
Loading the player ...