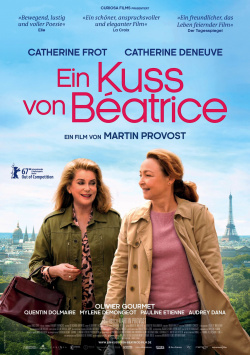 A Kiss from Beatrice

Claire (Catherine Frot) is a midwife with heart and soul. The fact that she hasn't had a man by her side for years and only sees her son sporadically doesn't seem to bother her, as long as she can put all her passion into her job. But cuts to the health budget and new technology mean that her once secure employment is suddenly in question. Claire is unsettled and fearful of the future. In this situation, of all places, she receives a call from Beatrice (Catherine Deneuve), her father's flamboyant ex-lover. She's been out of the picture for years, but now she's back and desperate to meet Claire. But the meeting not only brings back unpleasant memories, with the two completely dissimilar women, worlds collide that just won't harmonize - or maybe they will?

A Kiss from Beatrice is a difficult film: it has many genuinely beautiful moments, carried by two great leading ladies. There's no question about that. But these moments feel somewhat episodic, and director Martin Provost often fails to make these individual episodes cohere into a coherent whole. In too many places, the film feels unfinished and the story told in an arguably bumpy manner. The big problem this creates is that it makes it extremely difficult for the viewer to identify with the characters.

Particularly with the relationship between Claire and her garden neighbor Paul (Olivier Gourmet), the weaknesses of the production become especially apparent. Although you can definitely understand why Claire struggles with a relationship based on her character sketch, her behavior in one particular scene doesn't really seem comprehensible, which even makes her character a tiny bit unlikable. As the story progresses, there are moments that should actually make up for that. But even those somehow lack cohesion, so they never quite develop the emotional strength they need.

Acting-wise, A Kiss from Beatrice is beyond reproach. Catherine Deneuve in particular is truly magnificent as the aging eccentric. But Catherine Frot also has some strong moments where she really shines. Claire's reaction to her potential new place of employment, a state-of-the-art luxury maternity hospital, is quite wonderfully played. Despite this, the film never manages to grab the viewer for any length of time. As a result, the story seems quite nice, but somehow also a bit trivial - and that's exactly what can be said about the whole movie. That's why I only give it a: Worth seeing!

Cinema trailer for the movie "A Kiss from Beatrice (Frankreich 2017)"
Loading the player ...