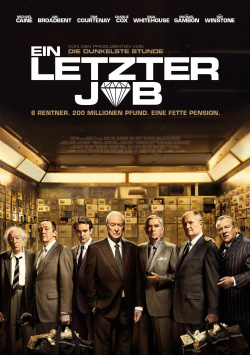 Actually, Brian Reader (Michael Caine), once a shrewd crook, wanted to retire from the criminal business entirely for his wife. But now she's dead and Brian no longer sees any point in his retired life. But then he receives information from young Basil (Charlie Cox) that could enable him to pull off his biggest coup: A burglary in London's diamond district - at the Hatton Garden Safe Deposit, a depository company that rents out safe deposit boxes for valuables to its customers. But of course Brian and Basil can't pull off the coup alone. Therefore, the pensioner crook must once again gather a squad of old colleagues around him, in order to be able to lift the multi-million dollar burglary. But as foolproof as thought the action is then unfortunately but not.

The story of One last job sounds absurd, but is actually based on true events. The Hatton Garden Safe Deposit burglary in April 2015 kept the British public fascinated and on the edge of their seats from the moment the crime became known until the perpetrators were convicted. Director James Marsh (The Discovery of Infinity) has crafted an entertaining rogue comedy from the story that, in its best moments, resembles a geriatric version of Ocean`s Eleven. The ensemble of actors, which besides the wonderful Michael Caine also has Michael Gambon (Harry Potter), Oscar winner Jim Broadbent or even the old warhorse Ray Winstone (Departed) to offer, is simply great and can score especially in the scenes that are characterized by dry wit.

The pleasantly self-deprecating play of the gentleman squad then also consoles over some small lengths. It becomes problematic only in the last act, when the story takes an (unexpected?) turn. Then the whole thing not only loses its amusing lightness, but also reveals that there is actually no real sympathetic character in the whole movie. Even Brian, who so far has had the audience's hearts on his side as a sly crook, reveals sides of his character that just make it obvious that he is a ruthless criminal.

Without the humorous undertones and the endearingly quirky sides of the characters, One Last Job turns into an overly conventional heist movie that still entertains well but fails to make any real impression. After the very successful beginning, this is a rather disappointing ending. Nevertheless: the many successful moments and the great actors make One Last Job on balance, despite some weaknesses, still quite: worth seeing!

Cinema trailer for the movie "One Last Job (Großbritannien 2018)"
Loading the player ...