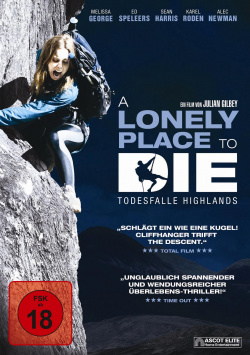 Movie: Actually, it was supposed to be a relaxing climbing trip in the Scottish Highlands for the five-member mountaineering troop around Alison (Melissa George). But when they find a girl buried in a hole in the ground during their tour, the excursion mood is quickly gone. Apparently little Anna, who only speaks Croatian, has been kidnapped and could be rescued by Alison and her friends at the last moment. It's just too bad that the kidnappers don't want to let their prey be taken away so easily and are now chasing the troupe through the Highlands. And soon the picturesque mountain landscape becomes the scene of a bloody struggle for survival, which is then joined by a third party.

A lonely place to die begins with mesmerizing tracking shots that set the viewer up for a first-rate survival thriller. Director Julian Gilbey (Rise of the Footsoldier) and his team have captured the rugged mountain landscape of the Scottish Highlands in truly gorgeous imagery, with the beauty giving way to a somber menace as the plot unfolds. The story Gilbey tells may seem a bit far-fetched at times, yet the production as a whole always feels realistic and thus extremely gripping. The suspense is kept up especially by the fact that Gilbey repeatedly incorporates set pieces from different genres. A little bit of horror, a kidnapping thriller, a little bit of standard crime thriller, all of that adds up to a first-class whole that keeps the viewer on a constant adrenaline rush until the very end.

Although the actors, which include Ed Speleers (Eragon) or Eamonn Walker (Lord of War) and Karel Roden (Hellboy) in addition to the genre-experienced Melissa George, act quite solidly in the impressive setting, the characters remain overall rather pale and one-dimensional. While that's only a limited negative in a thriller like this. But considering the fact that the characters could have been drawn a bit more interesting (especially the kidnappers and their hunters), this is a bit more disappointing in the case of A Lonely Place to Die than it would be in a less successful thriller.

This doesn't change much about the entertainment value of the film, though. Numerous twists and turns, great imagery, fast-paced staging and some rather gory moments make A lonely Place to die quite great suspense cinema that might appeal to lovers of both the thriller and horror genres. If you can overlook rather flat characters and some arguably clichéd dialogue, you definitely won't regret the chase through the Highlands. Absolutely worth seeing!

Picture + Sound: Especially in the landscape shots, the picture can please with high sharpness and rich colors. In close-ups and in the darker moments, however, here and there small weaknesses in the detail representation can be discerned. As for the sound, the DTS mix in particular can convince thanks to the atmospheric ambient sounds and some very good surround effects. Good!

Extras: Except for the trailer and other program tips from the provider, the DVD unfortunately has no bonus material to offer.

Conclusion: A lonely place to die is thriller entertainment of the particularly exciting variety. A bloody chase through a fascinating landscape, which comes on the DVD thanks to the good technical implementation also properly to the validity. Only the lack of supplementary bonus material clouds the fun of the DVD a little. Nevertheless: for fans of gripping thrillers of the somewhat harder pace absolutely recommendable!