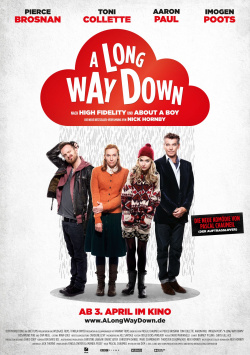 A Long Way Down

The good times when Martin Sharp (Pierce Brosnan) was a popular television presenter are long gone. After an affair with a young woman who, in hindsight, turned out to still be underage, Martin has lost everything he cared about. So why go on living? On New Year's Eve, the one-time crowd-pleaser decides to put an end to his miserable existence. But when he tries to throw himself off London`s Topper`s Tower, he discovers he`s not the only one who had this idea. Single mother Maureen (Toni Collette), 18-year-old Jess (Imogen Poots) and pizza delivery man JJ (Aaron Paul) also want to say goodbye to life in this place. But faced with an unexpected audience, the four blow off their suicide. Then, at the end of this unusual night, the unlikely quartet makes a pact: on Valentine`s Day, they will meet again at Topper`s Tower; by then, none of them will kill themselves. And so they have six weeks left - six weeks after which everything will look very different.

A Long Way Down is another successful adaptation of a novel by Nick Hornby. True, the film isn't quite as charming and amusing as About a boy and High Fidelity. But despite some somewhat labored moments, the first international directorial effort from Frenchman Pascal Chaumeil (The Hired Lover) has become an extremely successful tragicomedy that scores points with a strong ensemble of actors and some truly wonderful scenes. It's difficult in principle to approach subjects like suicide and depression in a humorous way. Nick Hornby's novel does a good job of balancing seriousness with light-hearted, life-affirming humor. And Chaumeil has obviously tried to master exactly this balancing act as well. He often succeeds very well, whereby especially in the humor it is fortunately only very rarely clear that here was no British filmmaker sitting in the director's chair.

The film benefits not only from the script filled with a lot of wordplay, but primarily from the really good actors, who on the one hand could not be more different, but on the other hand perhaps just because of that harmonize perfectly with each other. Pierce Brosnan, who even during his suicide attempt still shows his James Bond elegance, seems to have as little in common with Aaron Breaking Bad Paul as the wonderfully crazy acting Imogen Poots with Toni Collette, who plays the rather shy Maureen. It's just a lot of fun to watch these so disparate people become a community by chance and try to find their way back to life together.

While overall A Long Way Down can be described as a comedy. However, the dramatic aspect is neither downplayed nor completely marginalized by the humor. There are some very quiet and also quite moving moments, in which it becomes clear why these four people want to take their own lives. While not too much depth should be expected here. The film isn't a journey into the abysses of the human psyche, nor is it a didactic piece about depression, but a simple entertainment film. Nevertheless, the script and direction show a pleasant sensitivity in dealing with the subject matter, through which the humorous tone of the story does not seem disrespectful or inappropriately silly.

Instead, a very charming and entertaining overall impression remains, which leaves the viewer in good spirits despite the not exactly light subject matter in reality. A Long Way Down is certainly not a perfect film, nor is it a particularly sophisticated work. But as a simple feel-good comedy, the whole thing works quite well, if only because of the wonderful actors. Sometimes it's just the little things that help to increase the pleasure of life a little bit. And for that there is an absolutely deserved: Worth seeing!

Cinema trailer for the movie "A Long Way Down (Großbritannien 2013)"
Loading the player ...