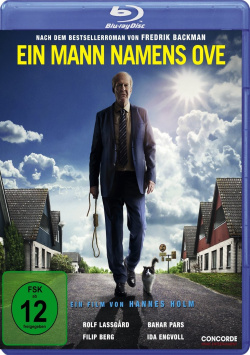 Film: Ove (Rolf Lassgård) seems to be a neighbour from hell. Every morning he pedantically makes his control round, notes down all the wrong parkers, locks away disruptive bicycles and makes sure that the garbage is disposed of properly. Ove does not take much pleasure with his constant controls and his grumpy nature. But only a few know the sad story behind Ove's behaviour. For he actually has a damn big heart, which seems to know no joy after the death of his beloved wife. When he also loses his job and is doomed to early retirement, Ove decides that the time has come to leave this world. But then a new family moves in next door and throws his plan overboard…

With his debut novel "Ein Mann namens Ove" author Fredrik Backman has created an absolute bestseller not only in Sweden. In many of the more than 30 countries in which the book has been published so far, the wonderful story has also made it to the top of the sales lists. No wonder a film adaptation wasn't long in coming. The renowned director and screenwriter Hannes Holm has turned the great book into a magical film that even left "Star Wars" behind in Sweden. What's the problem? This can be explained quite simply with a statement by Steven Spielberg, who once said what makes a really good film for him: he must be able to make the viewer laugh and cry at the same time. And that's exactly what "A man named Ove" does in a wonderful way.

Dramaturgically, the film has two levels. On the one hand there is the story of an unusual friendship between Ove and his new neighbours, which is interspersed with sometimes somewhat black humour. There are numerous clichés served and Ove's transformation from the old curmudgeon to the lovable grandpa next door doesn't offer many surprises either. But the realization - from the wonderful play of Rolf "Wallander" Lassgaring;rd over the music up to the atmospheric camera work - always hits exactly the right point and works despite a certain predictability simply best.

The second level is the very emotional look at Ove's life. From his childhood to the loss of his father to his great love Sonja (Ida Engvoll). These scenes are full of magical little moments that help the viewer to see Ove more and more with different eyes. With a perfect mixture of enigmatic humour, romanticism going to the heart and touching drama, a constantly increasing emotionality is built up, which culminates in a finale, in which hardly an eye should stay dry. But even though the ending can't really be described as cheerful, the audience isn't released from the cinema in frustration. As with the rest of the movie, Hannes Holm perfectly understands how to stage the ending in a way that cheerfulness and sadness go hand in hand and the viewer isn't only released into reality with a tear in his eye, but also with a smile on his lips.

"A man named Ove" may not reinvent the wheel. But the movie manages to be as bitterly evil as it is velvety soft, hilarious and deeply sad, dark and beautiful in a very unagitated way. And for that there is a more than deserved conclusion: Absolutely worth seeing!

Picture + sound: The Blu-ray presents the film in good picture and sound quality. The visual implementation captures the atmospheric atmosphere on all temporal levels of the story very beautifully with a high image sharpness and a powerful color mixture . The matching of contrasts and black values is also on a good level and supports the consistently positive overall impression. The sound is in a rather lively DTS-HD Master Audio Mix, which ensures that pleasant movement comes into the multi-channel range with small surround effects again and again. Good.

Extras: As a bonus, the Blu-ray only has the trailer and other program tips to offer. Too bad, because extras about the adaptation of the book template or the work of the set designers would have been really interesting here.

Fazit: "A man named Ove" is a wonderful adaptation of the bestseller of the same name. In a very unagitated way, the film manages to be as bitterly angry as it is velvety soft, hilariously funny and deeply sad, dark and beautiful. The Blu-ray presents the film in good picture and sound quality, only the non-existent bonus material has a negative impact here. But the film is strong enough to console us about this shortcoming. And therefore there is also a clear one: Absolutely recommendable!