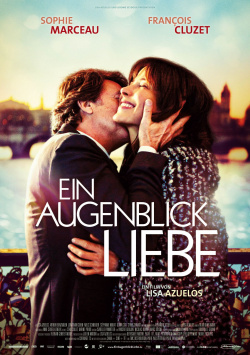 A moment of love

A small moment can change a whole life. The actually happily married family man Pierre (Fran&ccedil;ois Cluzet) must also realize this when he meets the successful writer Elsa (Sophie Marceau) at an event. There is a huge sizzle between the two from the first moment. The chemistry is just right and the erotic tension becomes more and more charged. But for Elsa it is just as taboo to make a pass at a married man as it is for Pierre to cheat on his wife. And so, after a heated flirtation, they part ways to continue their lives as before. But fate keeps bringing them back together and it becomes harder and harder to resist their growing passion.

Following the successful mother-daughter comedy LOL, leading actress Sophie Marceau and director Lisa Azuelos have teamed up again for A Moment of Love. They are supported by Fran&ccedil;ois Cluzet, who is known to a wide international audience at least since the enormous success of Pretty Best Friends as well as Sophie Marceau. This is the first time Cluzet has ventured into a thoroughly romantic role. And it works really well, as the chemistry between him and the as always enchanting Sophie Marceau is spot on. Sparks really fly right from the start here, and watching the two flirt becomes a truly titillating affair.

What gives the film its very special touch, however, is not the great chemistry between the two leads, but the cleverly incorporated what-if scenarios that keep the audience guessing. Azuelos beautifully juxtaposes the fantasies of her protagonists, which are inspired by lust and love, with the supposed reality and leaves it up to the viewer to pick out the version he or she would most like to see. This sometimes makes for very nice moments or for amusing scenes and then again for very unpleasant, heartbreaking moments in which the viewer is torn between the hope for a happy ending for Pierre and Elsa and sympathy for Pierre's wife, played by Lisa Azuelos herself.

Thus, in a very restrained but effective way, A Moment of Love manages to play on the audience's emotional keyboard and thoroughly engage them despite its rather ponderous pace. Sometimes the story seems taken directly from life, then again like a romantic fairy tale, sometimes like a light love story and then again like a heavy drama. All together it makes for a very nice, albeit not groundbreaking film, but one that clearly stands out from the crowd of similar works due to its original storytelling and very interesting ending. If you like well-acted screen romances that don't get lost too much in shallow kitsch, but always keep a little closeness to life and if you want to see something different than the obligatory confusions that are clearly aimed at a happy ending, you should definitely not miss this movie. Worth seeing

Cinema trailer for the movie "A moment of love (Frankreich 2014)"
Loading the player ...