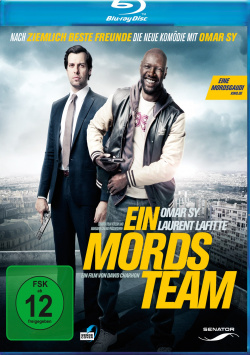 Film: The expectations were enormous: after Omar Sy was able to inspire well over eight million German cinema-goers in "Ziemlich beste Freunde", his next appearances will always have to be measured against the wonderful role of the lovable Driss. And this comparison cannot actually be won. But even if Sy's current film, the crime comedy "Ein MordsTeam", can't do very well in direct comparison, the film still manages to profit from the unexpected popularity of the leading actor. And so it quickly becomes clear: Omar Sy is by far the best thing about this comedy that is a little too over-twisted.

After all, he plays a very similar role here again. His suburban bull Ousmane with his casual outfit, his big mouth and his not always conventional methods is not necessarily what you would call a model policeman. But Ousmane doesn't let himself be bent, especially not by a snobby Parisian policeman like Francois (Laurent Lafitte), with whom he has to work after the body of the wife of one of France's most important industrialists is found in his neighbourhood. Ousmane, who has been on the trail of a mysterious ring of the Parisian underworld for months, is convinced that the murder is directly connected to his investigations. Desk stallion Francois initially does not want to believe in such a connection. He only wants to advance his career, and the connection of the respected murder victim to the underworld does not fit into his plan. The unequal duo repeatedly clash and it soon seems as if the investigation is going under in total chaos. But then the case takes a surprising turn...

For "Ein MordsTeam" the former commercial director David Charhon was clearly inspired by 80s buddy cop movies like "Zwei stahlharte Profis" or "Nur 48 Stunden". And also a good portion of "Beverly Hills Cop" blows through the Paris suburb Bobigny, where Ousmane pushes his service in best Axel Foley manner. The whole thing was packaged in a contemporary look and enriched with a little action and slightly over-twisted French humor. In the moments when this mixture works, "Ein MordsTeam" is very entertaining, funny and entertaining. However, the good scenes are in balance with those in which the gags just don't want to ignite and just seem to be a little bit too hard.

In these moments it's less the fact that the movie lacks every form of originality that stands in the way of an entertaining pleasure. Well copied can work and be regarded as a successful genre homage. But there is something else missing from the movie that seems much more negative: between the two main characters there is just barely the right chemistry. Sure, that's how it's supposed to be at first. But even in the moments when the unequal policemen approach each other, the spark between Omar Sy and Laurent Lafitte simply doesn't jump across. This is the reason why the movie lacks exactly the charm that made its great role models so successful.

No question, "Ein MordsTeam" offers friends of French crime comedies and casual Buddy comedies enough good moments in the 90 minutes running time, which make many of the less well done gags quickly forget. But those who hope for a similar charm offensive or for a sustainable good mood cinema as in "Ziemlich beste Freunde" will rather be disappointed. Therefore: nice dozen goods without long-term effect - no more, but also no less. And for that there is a deserved one: Worth seeing!

Picture + sound: At Blu-Ray the crime comedy presents itself in good to very good picture and sound quality. The visual implementation convinces with a high sharpness of detail, very powerful colours, well coordinated black values and harmonious contrasts. The sound is available in an atmospheric DTS-HD Master Audio 5.1 mix, which can score with rich sound effects especially at moments full of action. But even in more dialog-heavy scenes there is actually no real reason to complain. Gut!

Extras: As a bonus, interested viewers get a worth seeing Making of (approx. 26 min.), which reveals a quite comprehensive insight into the making of the film on the basis of interviews and recordings from the shooting. There is also a teaser (0:55 min.) of a slightly different kind, the trailer and other program tips from the provider. Gut!

Fazit: "Ein MordsTeam" is clearly inspired by the Buddy-Cop comedies of the 80s and offers in many moments also enough good jokes to entertain properly. But the chemistry between the two main actors, which doesn't really want to ignite, and some rather unimportant moments cloud the positive overall impression in the end. If you like French crime comedies and loose buddy comedies or love Omar Sy, you can access it here despite some weaknesses.