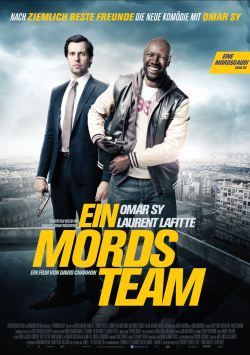 A hell of a team

The expectations are enormous: after Omar Sy was able to inspire well over eight million German moviegoers in Ziemlich beste Freunde, his next appearance is guaranteed to be measured against the wonderful role of the lovable Driss. And that comparison can't actually be won then. But even if Sy's latest film, the crime comedy Ein MordsTeam, won't do particularly well in a direct comparison, the film can certainly benefit from the lead actor's unexpected popularity. And to most viewers, it will then quickly reveal itself: Omar Sy is by far the best thing about this over-the-top comedy.

For, after all, he's playing a very similar role again here. His suburban cop Ousmane, with his casual outfit, big mouth and not always conventional methods, isn't exactly what you'd call a model cop. But Ousmane refuses to be bent, especially by a snobby Parisian cop like Francois (Laurent Lafitte), with whom he has to work after the body of the wife of one of France's most important industrialists is found in his neighbourhood. Ousmane, who has been on the trail of a mysterious Parisian underworld ring for months, is convinced the murder is directly related to his investigation. Desk jockey Francois doesn't want to believe in such a connection at first. He only wants to further his career, and the connection of the respected murder victim to the underworld does not fit into his plan at all. The unequal duo clash again and again and it soon seems as if the investigation would drown in total chaos. But then the case takes a surprising turn.

For A Murder Team, former commercials director David Charhon clearly drew inspiration from '80s buddy cop movies like Two Steely Professionals or Only 48 Hours. And there's also a good dose of Beverly Hills Cop wafting through the Parisian suburb of Bobigny, where Ousmane is on duty in the best Axel Foley manner. The whole thing was wrapped in contemporary visuals with a little action and slightly overdone French humor enriched. In the moments when this mixture works, A Murder Team is very entertaining, funny and entertaining. But the good scenes are balanced with those in which the gags just don't want to ignite and just seem cramped.

In these moments, it's not so much the fact that the film lacks any form of originality that gets in the way of an entertaining cinematic experience. After all, well-copied can certainly work and be seen as a successful genre homage. But the film lacks something else that seems much more negative: there is simply no coherent chemistry between the two main characters. Sure, in the beginning that's supposed to be the case. But even in the moments when the unequal cops get closer, the spark between Omar Sy and Laurent Lafitte just doesn't fly. Thus, the film ultimately lacks exactly the charm that made his great idols so successful.

No question, A Murder Team offers friends of French crime comedies and loose buddy comedies in the 90-minute running time enough good moments that make many of the less successful gags quickly forgotten. However, anyone hoping for a similar charm offensive or sustained good mood cinema as in Ziemlich beste Freunde because of Omar sy will experience a bitter disappointment. Therefore: nice dozen goods without long-term effect - no more, but also no less. Worth seeing

Cinema trailer for the movie "A hell of a team (Frankreich 2012)"
Loading the player ...