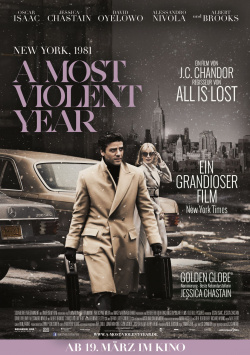 A Most Violent Year

New York in 1981: The crime rate has reached its peak. In some neighborhoods, the police seem to have completely given up on trying to keep law and order. Although organized crime seems to have the upper hand in many areas, immigrant businessman Abel Morales (Oscar Isaac) is determined to try and build a successful business legally with his wife Anna (Jessica Chastain). In order to expand with his heating oil company, Abel has secured an option on a vacant industrial site for a lot of money. Now he has little time to raise the remaining funds for the purchase. His good reputation seems to open important doors for him. But then his delivery trucks are repeatedly robbed on the open road and valuable heating oil is stolen. The union pressures Abel to arm his drivers, which he categorically refuses to do. He can't expect any help from Deputy District Attorney Lawrence (David Oyelowo) in the matter either - on the contrary: Abel has to learn that Lawrence is seeking a lawsuit against his company. The air is getting thinner and thinner for Abel and when one of his drivers takes up a gun during another robbery, the situation threatens to escalate. Will Abel actually still be able to achieve his goal legally?

In his third directorial effort, A Most Violent Year, filmmaker J.C. Chandor (The Big Crash, All is Lost) takes viewers to a particularly dark time in New York's metropolis of millions. It's a time when crime, drugs and corruption dominate the cityscape in many places. But those expecting a solid thriller with this theme may end up disappointed. True, there are fast-paced chases and a dramatic showdown. But first and foremost, Chandor stays true to the style of his previous films and lets quiet moments dominate the action. As a result, the film seems a bit plodding in some scenes at first glance. However, it pays off if you engage with Chandor's seemingly unexciting narrative style. For the calm appearance is deceptive.

For the director succeeds with these means to build an extremely oppressive and also tense atmosphere, which allows the viewer to feel the sheer hopeless downward spiral, in which Abel is unwillingly drawn into, well. One wishes for him to stay on the straight and narrow, but at the same time senses how futile that wish is. The fact that the various circumstances that make him question his ideals are all no fault of his own also lends the story downright tragic overtones.

The first-rate screenplay is grippingly conveyed to the screen by a well-chosen ensemble of actors. Oscar Isaac and David Oyelowo (Selma) in particular deliver more than convincing performances here. In addition to the story, the actors and the atmospheric music, it is especially the setting of New York that is responsible for the engaging atmosphere of the drama. Chandor and his team have brought the New York of the early 80s back to life with an authentic set and excellent camera work. It is the small details that underpin this impression.

A Most Violent Year may not be suspense cinema in the classic sense, but it is a genuinely gripping thriller-drama for lovers of slightly more sophisticated entertainment fare. J.C. Chandor paints a stirring portrait of a man trying to hold on to his ideals of righteousness and honesty against all odds. Even though the film is set in the 1980s, its message is more relevant than ever in times of financial and socio-political crisis. The good actors and the atmospheric imagery then also ensure that the bottom line is a clear Absolutely worth seeing!

Cinema trailer for the movie "A Most Violent Year (USA 2014)"
Loading the player ...