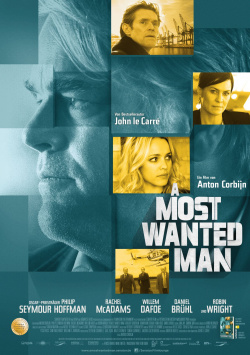 A Most Wanted Man

Even ten years after the devastating terrorist attacks of September 11, 2011, the fear is great that the intelligence services could once again fail in the same way as they did in Hamburg, from where the attacks by Mohammed Atta and his terrorist cell were prepared unnoticed in 2011. The alarm bells ring all the louder when the fugitive Issa Karpov (Grigoriy Dobrygin), half Russian and half Chechen, turns up in Hamburg and makes contact with the local Islamic community. Karpov wants to get his hands on his late father's illegally acquired fortune. It is clear to the secret services that this money is to be used to finance terrorist attacks. Günther Bachmann (Philip Seymour Hoffman), head of a semi-official special unit of the German secret service, is supposed to find out the truth and expose the string pullers in the background. Pressure from his superiors as well as the CIA is mounting as Bachmann looks to use idealistic lawyer Annabel Richter (Rachel McAdams) and shady banker (Willem Dafoe) to successfully complete his mission. But is Karpov really a perpetrator or perhaps just a pawn for the intelligence services?

As he did with The American, director Anton Corbijn's John le Carr&eacute; adaptation A Most Wanted Man relies not necessarily on pace but on atmospheric tension. The successful photographer again relies on atmospheric images, but again accompanied by film music composed by Herbert Grönemeyer, which gives the actors enough space to fully develop here. And the film benefits from this noticeably, even if one could accuse it of some lengths and a certain chattiness. Because even if some of the conversations about the financing of terrorists, the work of the intelligence agencies and corrupt banks could have been gladly exchanged for a little bit of classic thriller action, the political thriller is already extremely exciting because of the strong actors and the oppressive paranoia atmosphere.

Special attention is of course given to the much too early deceased Philip Seymour Hoffman, who can be seen here in one of his last great roles. The fact that the Oscar winner manages to captivate the audience actually only by his mere presence in such a way that minor lengths are quickly forgotten, makes once again painfully clear what talent the film world has lost with Hoffman. But Anton Corbijn is not only able to tease a great performance out of him. Willem Dafoe, Grigoriy Dobrygin, Rachel McAdams and Robin Wright also make great acting cinema out of this thriller. The top-class German supporting actors such as Daniel Brühl, Herbert Grönemeyer, Nina Hoss, Vicky Krieps (Die Vermessung der Welt) or Kostja Ullmann underline this extremely impressively.

Based on the novel Marionetten published in 2008, the story about the machinations of international secret services could not be more topical in terms of its subject matter. The most interesting level here is the question of what means are justified to save the lives of many thousands. Various wiretapping methods, kidnapping, manipulation of people and evidence - all these are means Bachmann and his team use here. But the film doesn't take the easy way out by simply portraying such actions as reprehensible. Rather, the viewer is repeatedly maneuvered into an emotional quandary and can continue to think about it for a long time after the film or discuss with his companion what should be allowed in the fight against terror, what price blameless citizens should be willing to pay for security and what lines should better not be crossed here. At least as interesting, however, is the question of who is actually pulling the strings here and who is a puppet. And even the answer to this question is not as simple as it might seem at first.

All this makes A Most wanted Man a first-class political thriller, which scores with its intense imagery, its top-class cast and with its intelligent dramaturgy. If you're not afraid to keep your little grey cells working even when it comes to entertainment cinema, you shouldn't miss this film. Absolutely worth seeing!

Cinema trailer for the movie "A Most Wanted Man (Großbritannien/Deutschland 2014)"
Loading the player ...