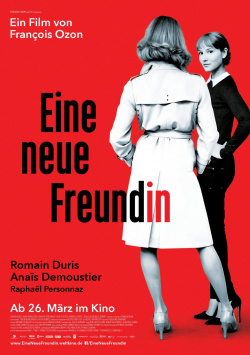 Since childhood, friends Claire (Anaïs Demoustier) and Laura (Isild Le Besco) have been inseparable. They've been through thick and thin, shared heartbreaks and enjoyed the finer things in life. Claire was there when Laura met and eventually married her David (Romain Duris). She became their child's godmother. It seemed like a friendship for the ages. But then Laura became ill and Claire watched the most important person in her life grow weaker and weaker and eventually die. Laura's death leaves Claire in a deep hole. Work is out of the question. And even her own husband Gilles (Raphaël Personnaz) cannot free her from her grief. But she tries to be strong for David and the baby, because she promised Laura to take care of them. But one day, when she goes to visit her godchild unannounced, she discovers a secret that at first disturbs her, but then arouses her interest and finally makes her question her own emotional world. For this secret could bring her one thing above all: A New Girlfriend!

With the drama loosely based on a short story by the successful author Ruth Rendell, A New Girlfriend, director François Ozon proves once again that he can reinvent himself with each of his films. Even though some themes such as death, coming to terms with grief and finding one's identity are definitely repeated in some of his films, Ozon is always experimenting with different styles of staging in a wide variety of genres. Whether drama, musical, comedy, costume romance, or erotic thriller, Ozon has always skillfully avoided accusations of self-plagiarism. This alone makes him one of the most exciting filmmakers in European cinema - even if not all of his films are convincing in terms of quality.

A New Girlfriend may not be one of the director's really big hits, but it is still an absolutely successful drama on both an acting and a dramaturgical level. This already starts with the atmospheric opening sequence, which runs through the most important stages in the lives of Claire and Laura in a fast-forward, so to speak, and thus makes it comprehensible to the viewer in just a few minutes how intense the friendship between the two has been. The masterful composition of images and music is a good proof for the technical and artistic talent of François Ozon. For the further course of the story, this very opening is immensely important, so that one understands why the prospect of a new girlfriend becomes a real obsession for Claire after initial rejection.

At the same time, the story is also about the lack of social acceptance of anything that is somehow different. The fact that David really blossoms for the first time after the death of his wife, when he can live out his secret in public without having to fear hostility or even worse consequences for himself and his child, shows very well the pressure people are under who do not conform to the social norm. Ozon's handling of the subject is fortunately not very striking, but very sensitive. Thus, he skillfully avoids that the story degenerates into an unintentionally funny farce and instead can unfold its emotionality very well. Great praise is also due to Romain Duris and Anaïs Demoustier, who also rely on restraint in their acting and just through this come across as believable and authentic.

A New Girlfriend is a very quiet, but quite haunting piece of French arthouse cinema. Certainly not a film for the masses, but despite small lengths, a must-see for all arthouse cinema lovers who appreciate dramas with unusual stories. Worth seeing

Cinema trailer for the movie "A New Friend (Frankreich 2014)"
Loading the player ...