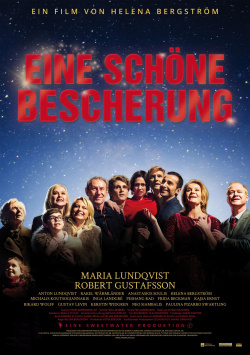 Christmas, the festival of love! The time when families come together in harmony and celebrate the reflective holidays together. For Simon (Anastasios Soulis) and Oscar (Anton Lundqvist), it's the perfect opportunity to finally tell their families about their plans for their future together. Playing an important role is their heavily pregnant girlfriend Cissi (Rakel Wärmländer), with whom the gay couple have bought a house outside Stockholm. But no sooner have their parents arrived than the harmony is over. While Oscar's mother shows up with her much younger lover, Simon's father has nothing better to do than inspect the new house for defects. The mood is far from harmonious warmth - but the truth about Simon and Oscar's unusual family plans just has to come out. Oh Merry!

A Beautiful Christmas by Helene Bergström was a huge success in Swedish cinemas during the 2015 Christmas season. The strong ensemble of actors, led by Robert Gustafson (The Centenarian Who Climbed Out of the Window.), contributed greatly to the success. The story itself also has some nice moments, but is in itself very conventional and lacking in surprises. For example, I'm not giving too much away when I say that it's probably clear to every viewer from the first glance at the belly of the heavily pregnant Cissi that her baby will be born at the end of the film. There are numerous aspects that are so predictable, and while they don't destroy the film's charm, which is definitely there. They do, however, ensure that this Bescherung is little different from the many other Christmas family comedies that flood cinemas and television channels year after year.

The dialogue simply lacks bite and the conflicts lack the moments of surprise to offer audiences something they just don't get to see every year. But even if the family comedy lacks originality, Eine schöne Bescherung is far from being a bad film. There are too many successful moments that make the audience smile or that have a certain emotional effect. And also the actors really do their best to play against the triviality of the script. The result is always something worth seeing and atmospheric, which is really fun to watch despite being highly recognizable.

It just would have been nice if the obvious talent of the director and cast had been put to better use. Eine schöne Bescherung is nice and entertaining, but just also completely interchangeable and very shallow. If you don't mind that and just want to see nice Christmas entertainment with Scandinavian humor, this family reunion can be recommended to you. Worth seeing

Cinema trailer for the movie "A nice present (Schweden 2015)"
Loading the player ...