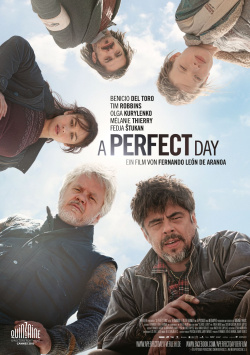 Working for an international aid organization in war zones, Mambr&uacute; (Benicio Del Toro) and B (Tim Robbins) have seen just about everything. While B reacts to mined cows, obdurate blue helmet soldiers or unhelpful locals with growing cynicism, Mambr&uacute; has acquired a protective vest of almost stoic composure. And it is with these qualities that they dedicate themselves to their latest task: retrieving a dead man from a well before the corpse contaminates the water. But that's easier said than done. For the rope breaks and a new one is almost impossible to procure. On top of that, they also have to take care of the inexperienced Sophie (M&eacute;lanie Thierry), who is driven by almost naive idealism, and for whom this salvage operation is her first. And when Mambr&uacute;s ex-lover Katya (Olga Kurylenko) shows up to check on the charity's work, it's finally the end of the fun. A perfect day, that is.

With A Perfect Day, director Fernando Le&oacute;n De Aranoa attempts a very difficult balancing act: he wants to tell a story about war and the desperate struggle of a few dedicated people to bring something like hope and peace to the country in times of pervasive suffering, death and hatred. It seems to be a battle against windmills that also requires them to stand against their own despair, discouragement and homesickness. It's tough stuff that the filmmaker wants to convey as realistically as possible. At the same time, the whole thing is meant to be a comedy with satirical undertones. A work in which the lightness of the dialogues and the humour assert themselves against the heaviness of the story. Finding the right balance there is extremely difficult.

But the script, written in collaboration with Diego Farias, the sensitive but at the same time very biting staging and the excellent acting of the actors ensure that Fernando Le&oacute;n De Aranoa succeeds in striking the perfect tone. In doing so, he makes his audience laugh heartily on several occasions, only to have scenes follow that make that laughter stick in the throat in their real-life absurdity, or that hit right in the pit of the stomach in their cruelty. This is particularly true of a sequence in which Mambr&uacute; and Sophie go to fetch a football from a boy's former home. The events surrounding this scene are full of absurdist comedy, but the discovery that follows in the house is extremely harrowing and full of cruel sadness.

It's a terrific achievement that the overall picture of the film is nonetheless fitting in tone and absolutely emotionally coherent. Following the aid workers on their odyssey around finding a simple rope, you'd like to think that all of this is just a complete exaggeration. But through this very simple example, the film makes it impressively clear on how many levels a war is actually fought and that even so-called peace missions sometimes get in the way of genuine help rather than actually providing it. An entertaining as well as important film with high cult potential, which definitely has what it takes to become the M.A.S.H. of a new generation. Absolutely worth seeing

Cinema trailer for the movie "A Perfect Day (Spanien 2015)"
Loading the player ...