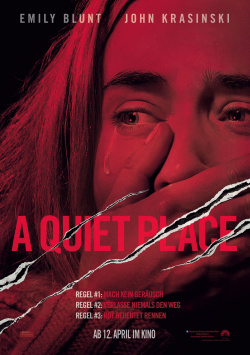 In the not-too-distant future, strange creatures have landed on Earth, preying on humans. The seemingly invulnerable creatures are blind, but their hearing is excellent. Anyone who makes even the slightest sound has little chance of survival. Only a few have survived the attack of the alien beings. Lee (John Krasinski) and Evelyn (Emily Blunt) have built a silent refuge in the countryside with their children. They have seemingly thought of everything needed to get through everyday life without making any noise. But eventually they discover that not everything can be planned and that despite all their care, their lives are in constant danger.

A mini-budget, a total of only five actors, two of whom are seen only briefly, and hardly any dialogue: A Quiet Place is truly exceptional, especially in these times of blockbuster material battles like the MARVEL and DC films. But not only that: the futuristic horror thriller is also really exciting. Director and leading actor John Krasinski creates a tense atmosphere from the very first moments, which really pushes you as a viewer into the cinema seat. One is even concerned to make as little noise as possible - which should be a matter of course in the cinema, but unfortunately has become the exception.

Sure, the characters don't always behave quite logically, but this is essential for certain moments of tension in the story. The ending isn't the strongest aspect of the film either, but thankfully isn't a total disappointment either. There's really nothing more negative that can be said about the flick now - and the weaknesses really only minimally tarnish the overall positive impression. Because overall, Krasinski has succeeded in creating a genre entry worth watching, which can create a great effect with a lot of restraint. It is in the moments when as little as possible is seen and heard that the tension becomes almost unbearable.

When all is said and done, Krasinski doesn't dare to show the monsters. But even if the design won't please everyone, what has been created here visually with little financial means is absolutely convincing. With a small but in every second convincing ensemble, an atmospheric setting and some well-placed moments of terror, A Quiet Place can fully meet the expectations that the trailer raises. If you like to get a little creepy in the cinema and don't need action and loud effects for that, you shouldn't miss this successful genre gem. Absolutely worth seeing!