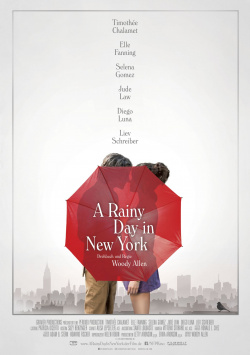 A Rainy Day in New York

It's supposed to be a big romantic gesture when Gatsby (Timothée Chalamet) invites his college sweetheart Ashleigh (Elle Fanning) to a romantic weekend in New York. He's got it all figured out: After Ashleigh has interviewed the famous director Roland Pollard (Liev Schreiber) for the college newspaper, he wants to take her out chic to eat and then show her classics of old New York. The New York he loves so much. But everything comes differently than planned. The interview somehow gets completely out of hand and sends Ashleigh, together with Pollard's screenwriter Ted Davidoff (Jude Law) and the celebrated film star Francisco Vega (Diego Luna) on a crazy journey through the city. And Gatsby meets Chan (Selena Gomez), the younger sister of his ex-girlfriend, who completely disturbs him with her quick-witted nature. And then there is the encounter, which he absolutely wanted to avoid: Gatsby has to face his mother (Cherry Jones), but this leads to a real surprise…

"A Rainy Day in New York" is a typical Woody Allen movie. Only that Allen himself no longer plays the leading role, but has ceded it to Timothée Chalamet, who plays exactly as young Woody Allen once did. And that's exactly where the movie's problem lies: It has some very funny and clever dialogues and nice moments - but it doesn't offer any surprises. Allen copies himself here again and again and even if he does it very well again, he doesn't even move a millimetre away from the terrain he has been moving on again and again for over 40 years. And that's a bit tiring in the long run.

No question, the film is really good at its core. How the characters find an unexpected new place in their lives during the course of the story, and how they develop noticeably as a result, is something Allen wrote very well. He has just established a very charming character with Chan, convincingly played by Selena Gomez. But like his main character Gatsby, the whole movie seems to be too anchored in the past. The old Woody Allen clings too much to the early Woody Allen, which leads to the fact that the humor seems a bit out of place and dusty at times.

Allen has proven again and again in the past that he can be different. At the same time, however, it becomes clear again and again how much his work fluctuates in terms of quality. Every really good movie can be followed by a rather average or even weak work. "A Rainy Day in New York" may belong to the better average, but in the end it can't leave a lasting impression because of the great similarities to other movies of the director. And that's why there is a well-deserved "worth seeing", which is not pronounced enthusiastically, though.