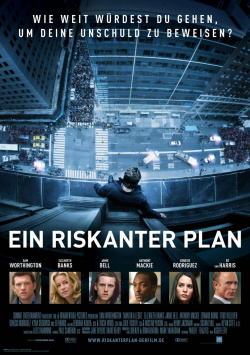 At first, the unknown man standing on the windowsill high in New York's Roosevelt Hotel appears to be an ordinary suicide. But the fact that he demands police psychologist Lydia Anderson (Elizabeth Banks), of all people, who is not well respected by her colleagues, to negotiate whether he jumps or not, strikes Detective Dougherty (Ed Burns) as a bit odd. But what neither he, nor his colleagues suspect: the man on the ledge is ex-cop Nick Cassidy (Sam Worthington), who escaped from prison a few days ago. There he served time for allegedly stealing a $30 million diamond from construction lord David Englander (Ed Harris). And now Nick is determined to prove he's innocent at any cost. And his life-threatening stunt, which draws many onlookers and the media, is only a small part of a risky plan Nick has concocted with his brother Joey (Jamie Bell).

A Risky Plan is an extremely suspenseful thriller that can be described as old-fashioned in the best sense of the word. The story is told at a decent pace, avoiding unnecessarily fast cuts and loud effects. Director Asger Leth takes his time to let the conspiracy thriller unfold slowly. There aren't any really big surprises in the process. But nevertheless he manages to build up a level of tension from the very beginning, which he can keep up until the admittedly somewhat predictable finale.

This is largely due to the setting of the story, of course. The narrow windowsill of a New York hotel offers enough potential for moments of almost breathtaking suspense. The parallel story of Nick's brother and his girlfriend trying to break into David Englander's home to prove Nick's innocence is also laced with some light-hearted humor here and there, but in turn also has enough thrills to keep the viewer thoroughly entertained.

Admittedly, the consistently good actors are not challenged to top acting performances here, but they all deliver solid performances that are simply fun to watch. The interplay between Jamie Bell and Genesis Rodriguez in particular makes for some wonderful moments. And Ed Harris clearly enjoyed being allowed to act uninhibitedly sleazy and evil once again.

A risky plan truly does not revolutionize the thriller genre, but the film offers the inclined viewer 100 minutes of really good entertainment, which may not always follow the laws of logic, yet does not give the impression of trying to take the viewer for a fool. Good actors, a great camera work, an exciting, grippingly staged story, all this easily prevails against the lack of originality. If you just want to see entertainment cinema of the thrilling variety again, you should go for this plan. Absolutely worth seeing!