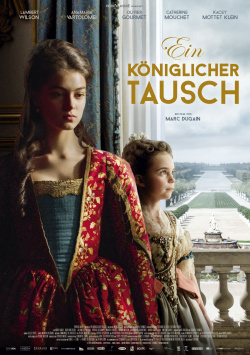 France in 1721: peace with Spain is on shaky ground. To consolidate it, the regent Duke Philip of Orl&eacute;ans plans for the eleven-year-old French king Louis XV to be married to Maria Anna Victoria, the daughter of the Spanish king, who is just four years old. In return, twelve-year-old Louise Elizabeth, Philip's own daughter, is to become the wife of the future Spanish king, Don Luis. Madrid agrees to this exchange of princesses. But what good is the best strategy if the young brides have minds of their own and don't want to play the grown-up game.

A Royal Exchange is an adaptation of a novel by author Chantal Thomas (Farewell My Queen), who in it - based on true events - traces a relentlessly revealing portrait of the mores of the nobility in the 18th century. Director Marc Dugain has transformed the novel into a splendidly appointed costume drama that reveals the diplomatic intricacies of this story with wry humor and restrained pacing. It seems so absurd in places that one may not believe that these are true events.

Since forced marriages are still an issue today, one may only shake one's head in wonderment at their use for diplomatic purposes, but at the same time one must recognize that the story also unfortunately has a certain topicality to it. The laughter that is generated here by biting cynicism in some scenes is sometimes stuck in the throat.

The slow, unexcited narrative style makes A Royal Exchange a bit unwieldy in places. But it's the young actors and actresses who easily make up for this shortcoming. It is thanks to them that the novel adaptation has become, despite some hangs, a rousing and quite moving historical drama, which has earned with small deductions a clear viewing value.

Cinema trailer for the movie "A Royal Exchange (Frankreich/Belgien 2017)"
Loading the player ...