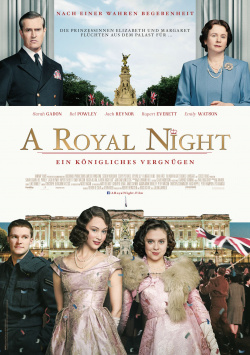 A Royal Night - A Royal Pleasure

London, 08 May 1945: The whole country is celebrating the end of the Second World War. Everyone knows that a hard time will come to them now. But on this night, no one likes to think about it. The joy that the cruel war has finally come to an end is too great. The young princesses Elizabeth (Sarah Gadon) and Margaret (Bel Powley) want to use the favor of the hour to mingle with the people and for once in their lives to celebrate like normal girls and not to care about protocol. Only reluctantly do her parents, King George VI. (Rupert Everett) and Queen Elizabeth (Emily Watson) reluctantly agree to their daughters' request. Alongside two screen guards, they are to be allowed to get up close and personal with the common people of London. But when the wild Margaret leaves as quickly as possible to have some real fun for once, Elizabeth also embarks on an adventurous journey through London that she will never forget...

Inspired by true events, director Julian Jarrold (Reunion with Brideshead) has staged an amusing fairy tale with A Royal Night - A Royal Pleasure, which scores points with plenty of irony, deliberate exaggerations and quite a lot of heart. With a relatively low budget, Jarrold and his team have succeeded very well in transforming the northern English city of Hull into 1940s post-war London. Only a few scenes were actually staged on real locations in London, but this is hardly noticeable due to the excellent work of the set designers. This makes it easy for the viewer to be transported into the era, and by extension the story, and relax.

Because that's exactly what the film offers: relaxed entertainment. Historical accuracy, at least dramaturgically, has not been the primary concern of the makers. Nor should depth necessarily be expected in the story and in its characters. Instead, Jarrold relies on smart dialogues and elements of classic screwball comedy. This has speed, is sometimes extremely funny and simply spreads good humor. The fact that many clichés are served here, that there is little emotional warmth from the characters and that some scenes threaten to drift into the silly, only marginally harms the positive overall impression.

Because what A Royal Night - A Royal Pleasure wants to achieve, the film accomplishes with flying colors: it offers its audience 90 very light, humorous entertainment with plenty of food for the eye. Those who expect some kind of sequel to The King`s Speech will surely be disappointed. For one thing, Rupert Everett does not play King George VI nearly as well as Colin Firth. For another, the script is nowhere near as clever and heartwarming as The King`s Speech`s Oscar-winning script. But it doesn`t have to be in order to work well. If you leave the cinema with a satisfied smile on your face after this turbulent trip through London, then that is exactly what you should expect from a comedy like this. And for that you get a more than deserved: Worth seeing!

Cinema trailer for the movie "A Royal Night - A Royal Pleasure (Großbritannien 2015)"
Loading the player ...