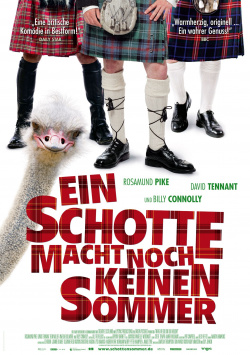 One Scot Doesn't Make a Summer

Doug (David Tennant) and Abi (Rosamund Pike) are in for a particularly stressful weekend. Not only do they have to take their three children to the Scottish Highlands for the 75th birthday of Doug's father Gordie (Billy Connolly), with stress, bickering and chaos already pre-programmed. No, the two also have to play the happy couple in front of Doug's entire family, which they have long since ceased to be. They have been living apart for months and the divorce is only a matter of time. But the others and especially Gordie are not supposed to know about it this weekend. But that's not so easy, given the talkativeness of their children and the probing questions of Doug's brother Gavin (Ben Miller). But just when Doug and Abi think this family weekend couldn't get any more disastrous, a visit to the beach together by Gordie and his three grandchildren ends in a completely unexpected way.

One Scotsman Doesn't Make a Summer is a turbulent family comedy that dares to tackle the very difficult undertaking of approaching issues of separation and death in a light, humorous way. Directors Andy Hamilton and Guy Jenkin, both longtime TV comedy pros, have met this challenge first-rate. It may be that their film is no profound masterpiece, no groundbreaking comedy that will stay with you for long. But through the endearingly quirky characters, the light-footed play with the common clichés of the genre, as well as the light-hearted handling of difficult topics, they have succeeded in creating an enchanting feel-good film that can be prescribed as the perfect antidote to autumn depression.

From the very first minutes, the very special humor of the two directors and screenwriters pays off. Doug and Abi's little daughter, for example, who prefers to cuddle with stones rather than stuffed animals, is immediately taken to heart by the wonderfully atypical drawing of this character, as is her grandfather Gordie, portrayed with restrained mischievousness by the superb Billy Connolly. Even Doug and Abi, who actually bicker incessantly, are somehow likeable in their own way. And although as a viewer you quickly know that this family celebration is going to be a real disaster, you are only too happy to spend your time with these dysfunctional, but still very likeable characters.

In addition to the good actors, the wonderfully rugged landscape of Scotland also plays a not insignificant role. It is the combination of story and imagery that makes the outcome of Gordie and his three grandchildren's visit to the beach so great. Also, the avoidance of any form of pathos or kitsch more than pays off here. There are, of course, other scenes that don't quite work as well, where the gags don't quite want to hit or the characters tug a little at the audience's nerves. But whenever a minor flaw threatens to disrupt the enjoyment, it's followed by a moment that either encourages hearty laughter or is poignant in a completely unobtrusive way.

This creates an overall positive picture throughout, despite the minor hang-ups, which is further manifested by an enchanting finale. One Scotsman Doesn't Make a Summer actually gives its audience the best you can get in cinema for your money: relaxed escapism from reality and entertainment for the heart and for the laughing muscles, which remains pleasantly light even in its heaviest moments. And for that there is also a very clear: Absolutely worth seeing!

Cinema trailer for the movie "One Scot Doesn't Make a Summer (Großbritannien 2014)"
Loading the player ...