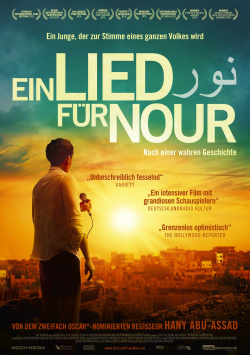 A Song for Nour

As children, Mohammed (Qais Attalah) and his sister Nour (Hiba Attalah) were inseparable. Together they made music and lived the dream of becoming famous with it one day. But life throws a spanner in the works in a particularly dramatic way. Years later, Mohammed (Tawfeek Barhom) has actually sworn off singing. But when he learns that the auditions for the next season of the successful casting show Arab Idol are taking place in Cairo, the old fire is rekindled. Against all odds, he plans to attend the audition and win the show - with a song for his sister Nour!

A Song for Nour tells the true story of Mohammed Assaf, who as a Palestinian made his way into the Arab version of Deutschland sucht den Superstar and even emerged victorious in a stirring final. Even though the ending is already known (which it would be even if it wasn't a true story, as the whole thing is already staged in an overly predictable manner), this doesn't detract from the drama's entertainment value in the slightest. Because A Song for Nour lives from the emotional power of its story and from the good actors. This is especially evident in the first part of the film, which focuses on little Mohammed and his sister. The children play really well and their desperate attempts to become successful musicians are charming, humorous and movingly realised.

The second half, which shows the older Mohammed applying for the audition via Skype and then making the perilous journey to Cairo to follow his dream, can't quite match the emotionality of the first half. For that the production - even if it follows a true story - seems a bit too thick. Nevertheless, the whole thing works very well and especially the finale gives you really nice goosebumps. And when you're shown the real images of what Mohammed's final song triggered in his homeland, the film also takes on a relevance that you might not have given it before.

What A Song for Nour really shows beautifully is how important and powerful music can be. It can transcend boundaries, prejudice, and hatred, making us all - if only for a moment - equal. Music can have a healing and reconciling effect and that is why it is so important for us as humans. The example of this story makes that more than impressively clear. And even if the staging may have its little weaknesses, this message makes the film, on balance, quite clear: absolutely worth seeing!

Cinema trailer for the movie "A Song for Nour (Palästina/Großbritannien/Katar 2015)"
Loading the player ...