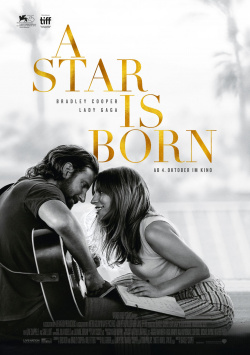 A Star Is Born

When country superstar Jackson Maine (Bradley Cooper) hears Ally (Lady Gaga) sing for the first time, he is smitten. Not only from the talent of the singer, who so far only performs in small bars, enchants him immediately. He falls for her with skin and hair, which turns Ally's life completely upside down. On their first date, Jackson drags her on stage to perform one of her self-written songs for his fans. And suddenly Ally has a record deal of her own and is in the spotlight. Jackson, on the other hand, is struggling more and more with his hearing and drinking problems. As meteoric as his great love Ally rises, as dramatic he threatens to fall. And so soon, not only Jackson and Ally's careers, but their relationship faces a serious challenge.

For his directorial debut, Bradley Cooper has picked a story, A Star Is Born, that has been filmed three times since 1937, most recently in 1976 with Barbra Streisand and Kris Kristofferson. So now the fourth version of the story is coming to cinemas - and it's not only worth seeing, but also worth hearing. To say this before all the praise: The film is truly not perfect. It's a few minutes too long, the story - even if you don't know the previous movies - isn't particularly original and a few scenes seem a bit exhausting with their improvised character. In addition, there is a scene in which Bradley Cooper overacts a bit - overacting with a slight embarrassment factor. But in view of the otherwise really very good overall impression, these criticisms only have a marginally negative impact.

The acting performances are very good across the board. Especially Lady Gaga does a great job. And not only vocally. She convincingly gives the unassuming girl next door, who first enchants Jackson and then the whole world with her musical talent and charisma. Bradley Cooper, who has an I mumble in my beard contest with Sam Elliott (at least in the original version), brings - apart from the already mentioned scene - the different facets of his character across well. As a smart superstar who has the hearts of his fans at his feet, Cooper is just as believable as he is as a broken alcoholic who threatens to lose control of himself more and more.

One of the film's great strengths are the songs, most of which were (co-)written by Lady Gaga and Bradley Cooper themselves and performed live in front of an audience. They are rousing, sometimes very emotional songs, some of them like The Shallow catch your ear very quickly. And the great ballad I`ll never love again is pure goosebumps, with Lady Gaga putting a whole range of emotions into her voice here. Simply wonderful. As beautiful as songs like Evergreen from the 1976 version are, it is to the credit of the makers of the current version that they resisted the temptation to simply use cover versions of these classics. Bradley Cooper's A Star Is Born is its very own thing - and that's a good thing.

Not perfect, but really, really good - that's the best way to sum up this remake. It's stirring, emotional, romantic, humorous and deeply sad - it's great cinema. And for this there is clearly a: Absolutely worth seeing!