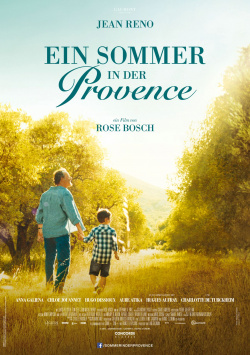 A Summer in Provence

Summer vacation is supposed to be the most wonderful time of the year in the lives of children. Not so for teenagers L&eacute;a (Chlo&eacute; Jouannet) and Adrien (Hugo Dessioux). After their parents split up, they have to spend time with their little brother Th&eacute;o (Lukas Pelissier) at their grandparents in Provence. For the teenagers from Paris, the prospect of a holiday in the countryside without disco, cinema or internet is pure horror. The fact that their grandfather Paul (Jean Reno), whom they've only just met, is a grumpy curmudgeon doesn't make things any more pleasant either. And so it doesn't take long for the teenagers and their grandfather to clash. But just when the situation threatens to get really out of hand, this summer in Provence has a few surprises in store for both generations that will change everything.

A Summer in Provence offers its viewers nearly two hours of short vacation in a truly idyllic setting. Director Rose Bosch (The Children of Paris) creates a charming atmosphere in which the fairly conventional family story can unfold beautifully. Unlike the two teenagers, for whom this place is initially true hell, as a viewer you immediately feel at home on the estate of Paul and Ir&egrave;ne (Anna Galiena). Surrounded by nothing but olive trees and picturesque scenery, the simple farmhouse seems like a place you'd want to spend the holidays yourself - even if only for a few hours. This helps to benevolently accept some very predictable moments and rather clichéd character sketches and simply enjoy the film for what it is: just nice, harmless cinema entertainment that doesn't offend the mind and flatters the soul.

The fact that the film works, however, is not only due to the beautiful images, but also to a truly great Jean Reno. As the grumpy grandfather who never misses an opportunity to reach for the good tipple or rant about God and the world, Reno delivers a wonderful performance. When little deaf Th&eacute;o slowly melts the old curmudgeon's stony heart, the French superstar provides a goosebump moment or two. But it becomes especially amusing when Paul's "everything used to be better" mentality clashes with the "if there's no app for it, it's stupid" attitude of L&eacute;a and Adrien. Because even though these conflicts are actually extremely cliché, Jean Reno's acting makes sure that as a viewer you have a deliciously good time here.

But it's not just Reno, his young co-stars also leave a consistently positive impression. Admittedly, they don't really deliver impressive performances now. But when the two bicker with their grandpa or Adrien falls for the charm of the extremely seductive village beauty Magail (Aure Atika) resp. that of her décollet&eacute;s succumbs, while L&eacute;a's heart begins to beat fiercely for the charming pizza maker Tiago (Tom Leeb), then you realize that Rose Bosch has really chosen her actors very well. As contrived as some scenes may seem, the acting of the young actors comes across as pleasantly authentic and absolutely convincing. This of course also applies to the little Lukas Pelissier, who with his charm not only wraps his film grandfather, but also all viewers very quickly around his finger.

A Summer in Provence is certainly not a masterpiece and also does not have what it takes to become a classic. But the film offers nice, charming, feel-good fare that is simply knit, but no less effective because of it. It's a film that makes its audience at least briefly happy, and with the exception of a few minor lengths, it's also very entertaining. It may not be quite as exciting as a real visit to Provence, but it's absolutely worth seeing!

Cinema trailer for the movie "A Summer in Provence (Frankreich 2014)"
Loading the player ...