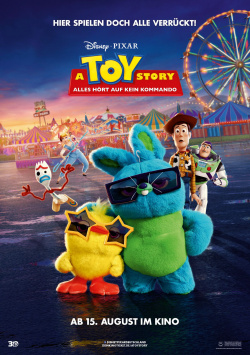 A Toy Story: Everything Listens to No Command

Woody and his toy friends have found a new home with little Bonnie. When Bonnie makes a new toy with Forky at daycare and immediately takes the repurposed plastic fork to her child's heart, the lovable cowboy realizes that the days of playing with him so happily are so slowly but surely over. When Forky, who is absolutely convinced that he is not a toy but garbage, gets lost during an outing, Woody does everything in his power to rescue the new roommate - of course with the support of Buzz Lightyear and Co. For the friends begins an exciting adventure, on which they meet new companions and old acquaintances - and at the end of which nothing will be as it once was.

Now 24 years ago, Toy Story, the first film animated entirely on the computer, came into theaters. With Part 3, released in 2010, the story seemed perfectly complete. There was a definitive ending with a new beginning at the end. There's really no better way to end the story of Woody, Buzz, and the other lovable toys. Right? A Toy Story: Everything Listens to No Command is a real surprise in that regard. Because this fourth installment is the perfect conclusion you didn't know you needed. Yes, of course, all the films in this series are similar in structure, but the creators manage to take it in a surprising direction again this time, leading to a near-perfect finale.

The creative minds haven't run out of ideas. Forky is the best example of this. The way a simple plastic fork has been turned into an incredibly endearingly quirky character is simply brilliant. And also the way in which the sometimes quite gruesome events in an antique shop are resolved speaks for the great talent of the creators. Time and again, they manage the feat of making the audience laugh tears, only to have them unexpectedly turn into tears of emotion.

But best of all, they manage to capture what it means to be a child. And it is not only children who can identify with this, but also all adults who have kept a piece of their own childhood in their hearts. That's why there's always a bit of humour interspersed, which only the older generation can laugh at, whereas there are many gags for the little ones that are suitable for children, but never flat. A Toy Story: Everything listens to no command is in the best sense of the word a family film, whereby a few scenes for very small children then nevertheless somewhat too frightening could be.

Naturally the Toy Story universe could be extended still further. And given the unwavering popularity of the series, it's not unlikely that there will be more movies in the future that focus on other toys. The story of Woody, however, is really perfectly finished with this installment. And that's why A Toy Story: Everything Listens to No Command can be said to be a worthy and wonderful conclusion that pushes all the right buttons on the emotional keyboard of young and old alike. A wonderful film for which there is only one possible conclusion: Absolutely worth seeing!!!

Cinema trailer for the movie "A Toy Story: Everything Listens to No Command (USA 2019)"
Loading the player ...