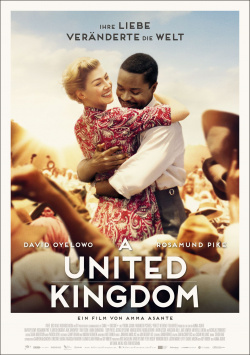 London in 1947: The young office worker Ruth Williams (Rosamund Pike) meets the charming Seretse Khama (David Oyelowo from Bechuanaland) at an event of the London Missionary Society. There is a huge spark between the two and against the will of her parents Ruth decides only a short time later to accept the marriage proposal of her beloved. But this is where the problems really begin. For Seretse is the king of Bechuanaland and is supposed to return to his country to take up his inheritance. But with a white woman at his side, this is actually unthinkable. Nevertheless, as newlyweds, the two venture to Seretse's homeland, where their love must battle prejudice, apartheid, and the British Empire.

In A United Kingdom, director Amma Asante tells the true story of Seretse Khama, the king of Bechuanaland, now Botswana, and his wife, whose love became a pawn in politics and apartheid. The story is beautiful, stirring, and in places, very upsetting. But unfortunately, the same cannot always be said about the production itself. Too often, Asante simply lays it on too thick, juggling campy dialogue and all sorts of clichés, which repeatedly minimizes the emotional power of the story. This is a shame in that the actors make a genuine effort to play against the weaknesses of the direction and script.

While David Oyelowo is convincing with plenty of charisma, Jack Davenport once again proves his talent for such unsympathetic roles with a smugly condescending manner. Rosamund Pike plays committed, but uses the suffering-filled doe-eye a bit too often, which then takes away any intensity from her acting in such moments. However, while such weaknesses prevent the film from really reaching its full potential, the story and its message are strong enough to make the whole thing worth watching nonetheless. A United Kingdom is a plea to the power of love, but also to tolerance and to holding on to values and your own morals.

So, a few beautiful landscape shots, good actors and a positive message are set against a production that is a bit too campy and overloaded with clichés. The bottom line is that the positives outweigh the negatives a bit, so lovers of historical romance dramas won't regret buying a movie ticket. But if you expect a really inspiring movie with really big emotions, you might be disappointed in the end. And that's why there is only one: Worth seeing with reservations!

Cinema trailer for the movie "A United Kingdom (Großbritannien 2016)"
Loading the player ...