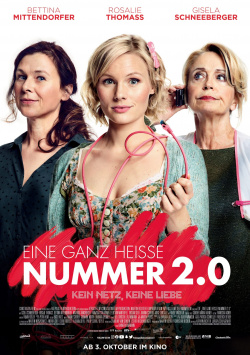 With their sex hotline, the friends Waltraud (Gisela Schneeberger), Lena (Rosalie Thomass) and Maria (Bettina Mittendorfer) saved themselves from imminent bankruptcy a few years ago. But now their commitment is needed again, because the whole of Marienzell is suffering from the rural exodus. The reason for this is the lack of high-speed Internet. Laying the cable needed for this is not profitable for the providers. And the plan to simply lay the cable themselves also goes wrong. Then the three women have an idea that might save them: they want to take part in the big dance competition in the neighbouring Josefskirchen! The prize money could help them with the necessary wiring. But not only that they barely have time to rehearse a choreography despite the support of juror Jorge Gonz&aacute;lez. It also turns out that the wife of the mayor of Marienzell also wants to participate in the competition with her traditional costume group. And she wants to prevent Waltraud, Lena and Maria from winning at all costs.

In 2011, director Markus Gollner brought a real surprise hit to the cinemas with the comedy Eine ganz heiße Nummer, which could inspire well over 1 million viewers. A sequel has been announced for some time, and now Rainer Kaufmann has made it eight years after the first film. No question: The chemistry between Rosalie Thomass, Gisela Schneeberger and Bettina Mittendorfer is still right and there are some really funny moments. But overall, unfortunately, it confirms again that sequels are usually just a tired copy of the original.

The story has a few quite nice ideas, but the implementation is quite bland. Most of the scenes that are supposed to be funny just aren't. There is just a lack of pace and wit, quite the opposite of part 1. As a result, the charm that helped the predecessor overcome many a weakness is also lost. A very hot number 2.0 comes across as very shallow TV entertainment that doesn't really hurt, but which also can't leave any lasting impression.

Although it is to the makers' credit that they didn't tell the same story again and instead opted for a completely new story that even has something like a socio-political relevance, the result unfortunately can't quite convince. Despite the once again beyond any doubt leading actress trio, there is only one for this comedy: Only worth seeing with clear cutbacks!