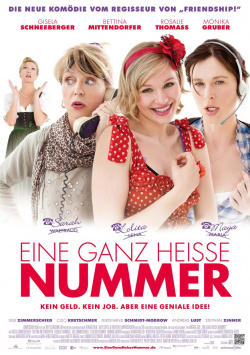 After the great success of Friendship! director Markus Goller has returned from America to his native Bavaria to make the audience laugh again with likeable characters and a funny story. Despite many nice moments, however, Eine ganz heisse Nummer has become only a conditionally worthy successor to his first hit film.

The film adaptation of Andrea Sixt's novel of the same name tells the story of three women Maria (Bettina Mittendorfer), Waltraud (Gisela Schneeberger) and Lena (Rosalie Thomass), who work together in a small grocery store in a village in the Bavarian forest. As idyllic as life in the village may seem at first glance, the economic crisis has left clear traces here as well. At the latest since the closure of the glassworks, so important for the economy, there are fewer and fewer real prospects in the community. And the small grocery store is also on the verge of going out of business. But even though the divorced Maria is enormously burdened with the care of her father and has to let herself be humiliated again and again by the arrogant mayor's wife Gerti (Monika Gruber), she does not want to give up the shop so quickly. When she receives an obscene phone call, she gets the idea: together with Maria and Lena she wants to start an erotic phone service. After initial inhibitions and teething problems, the very hot number develops into a great success. But can such scandalous goings-on in a small Bavarian village remain unnoticed for long?

An ganz heisse Nummer has quite a few good aspects, among which are undoubtedly the three leading actresses. Gisela Schneeberger, who became famous as Gerhard Polt's partner, provides some very good laughs as the constantly grumbling Waltraud, while Bettina Mittendorfer (Summer in Orange) is more convincing on a dramaturgical level. Rosalie Thomass (Beste Zeit) is charming and endearing as the slightly naive Lena. This mismatched trio of ladies carries the film with quaint charm and humor even in the weaker moments, of which there are unfortunately just too many, especially in the first half.

Because especially at the beginning Goller seems to be unable to quite decide whether he wanted to direct a light comedy with a slightly coarser touch or rather a humorous social drama. The humor here still comes off a bit bumpy, focusing more on constipation, the still very much alive libido of Maria's old father, and the feces of Father Gandl's dog. When the hypocrisy in the village community takes center stage or the telephone operators' first attempts at walking are shown, there are still some really good laughs that save the film from mediocrity after all.

While Friendship! not only had a higher gag density but also looked like a cinema production in most moments, Eine ganz heisse Nummer often feels like a production that would simply be better off on TV. While the main characters are charming, some moments genuinely charming and the story entertaining, great cinema entertainment just looks different. Who likes German comedies with Bavarian charm and good actresses, however, will be well served and can choose this quite hot number confidently. Who expects a cinema fun in best Friendship! manner, is unfortunately wrong connected

Cinema trailer for the movie "A hot number (Deutschland 2011)"
Loading the player ...