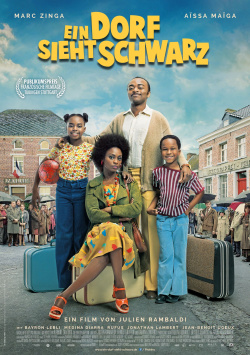 France 1975: Seyolo Zantoko (Marc Zinga) has made it: he has earned his doctorate in France and now hopes to stay in this beautiful country to open his own practice. To get the appropriate residence permit, he accepts the offer of Monsieur Ramollu (Jean-Beno&iuml;t Ugeux), the mayor of Marly-Gomont, to work as a doctor in the small village. His wife Anne (A&iuml;ssa Ma&iuml;ga) and his children Sivi and Kamini (Medina Diarra, Bayron Lebli) are less than thrilled about this. Not only is life in the sticks not living up to their dream of Paris. They are also treated like lepers because of the colour of their skin. But Seyolo doesn't want to let this destroy his dream and tries everything to be accepted by the village community. But when he becomes a political pawn in the election campaign for the mayor's post, his time as a practicing doctor in France could soon be over.

A Village Sees Black is based on a true story, admittedly viewed here through rose-colored glasses. That's not a bother, though, because the result is a very charming feel-good comedy that does a really nice job of memorializing Seyolo Zantoko. The screenplay was written by Seyolo's son Kamini, who had a hit as a musician in 2006 with the song Marly-Gomont and thus also laid the foundation for this beautiful film adaptation of his parents' story.

When Seylolo and his family arrive in the small village, one is reminded of the delightfully exaggerated clichés from Welcome to the Sh`tis. When the mayor gives his new doctor a tour of his new home, for example, and tries to talk up the old jalopy that will henceforth serve as his means of transportation for house calls, it's extremely funny. But behind the laughs there are also some very bitter moments. Particularly poignant, for example, is the moment when little Kamini first sees the children playing happily in the schoolyard, full of anticipation of being allowed to join them - only to be viciously insulted moments later.

However, what is a really successful feel good movie naturally doesn't completely drag its audience down. And so, of course, there is the appropriate, happy-go-lucky redemption for such conflicts as the film progresses. There are some moments, though, that don't work out quite as well, as they seem a bit too over the top. But overall, the film leaves an all-around positive overall impression, right up to its very touching, beautifully and movingly realized finale. It's a beautiful story that can convince with a lot of humor, but also with thought-provoking moments. And for that, it definitely gets a: Absolutely worth seeing!

Cinema trailer for the movie "A Village Sees Black (Frankreich 2016)"
Loading the player ...