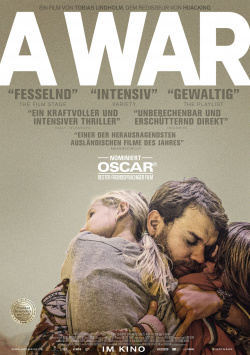 During the Danish military's first overseas deployment to Afghanistan, Commander Claus Pedersen (Pilou Asb&aelig;k) tries everything to do his duty and get himself and his men home safely. But when his unit is ambushed by the Taliban one day, Pedersen must make a decision that will have far-reaching consequences. To be sure, he manages to save his men. But the air reinforcements he had called in to do so have resulted in the deaths of numerous civilians. When he returns home, Pedersen is unable to enjoy his life as a family man of three at the side of his wife Maria (Tuva Novotny), but faces a grueling trial that could put him behind bars for a long time.

With A War, Tobias Lindholm (Borgen, R) has directed a quiet but intense drama about war and its consequences. Set primarily in Afghanistan, the first half of the film is relatively conventional. Lindholm almost completely avoids pathos and clichés and shows the soldiers not as cool, superhuman fighting machines, but as emotionally and physically vulnerable people. This makes these scenes seem very rousing and authentic. Nevertheless, you don't really get anything new here. The film only gets really interesting after the forced return of Claus Pedersen to his home country. Here Lindholm shows very impressively how differently the soldiers, their families and outsiders like the court, before which Pedersen has to answer, deal with the war and its processing.

It is very positive that Lindholm leaves it to the viewer whether one can understand his decision or whether one thinks that he should bear the consequences for it and go to prison. The commander is not a clear hero figure, but a very simple man who had to make a fatal decision under enormous pressure. This is precisely what makes the trial, which dominates the second half of the film, so gripping and involving, even though not much actually happens here.

Because Lindholm has not tried to tell a film about the truth of war, but about the people at war, the acting performances take on a very central role. And here Pilou Asb&aelig;k (Borgen) in particular delivers quite great cinema. But Tuva Novotny (The Truth About Men) as Pedersen's wife Maria and Charlotte Munck as relentless prosecutor Kajsa Danning also make A War quite great acting cinema.

The film impressively proves that restraint can sometimes lead to a particularly powerful result. Certainly, on a purely visual level, A War is not necessarily a work that needs to be seen on the big screen. But on a dramaturgical and acting level, it's definitely worth its admission money. If you appreciate Danish cinema and generally have a soft spot for unexciting but intense war dramas, you shouldn't miss this film. Absolutely worth seeing